Call me a realist, call me a cynic, call me a political paranoid, I don't care.

But I'm not convinced that the FitzWalkerVos 'Revenge of the little men' bill, as I've dubbed it, is the last dirty pool maneuver these elitist, special-interest bell-hopping Republicans had up their sleeves.

In the wee hours of the morning after Evers, Barnes and Kaul had tallied unbeatable victory margins, I posted a celebratory, congratulatory, almost giddy item.

Several hours later, I began to worry that Republicans weren't going to go quietly, especially since they had planned a special session purportedly to deal with the Kimberly-Clark subsidy, so I wrote:

Are Walker, Fitzgerald and Vos statesmen or spoilers?

Will they calm the waters, or roil them?

Well, we got our answers.

I wrote that because I was remembering how Walker "dropped the [Act 10] bomb," so likes surprises.

And before that benefited from campaign operatives and equipment inserted in his Milwaukee County Executive office suite during his run in 2010 against Tom Barrett, so likes stealth.

And how in his 2012 recall campaign he had directed a secret routing for certain large donations, so has a history of playing the ends-justify-the-means game when taking and holding an advantage.

And Urban Milwaukee's Bruce Murphy noted that The New York Times had reported, in fact, that the GOP's power grab planning had begun months earlier:


As a recent story in the New York Times reported, the planning for this sweeping 141-page legislative package began last spring — more than half a year ago. This is not an upsurge of angry revenge, but a cooly-plotted, long-term scheme to assure Republicans continue to hold power permanently in Wisconsin.

That's a helluva contingency plan, no doubt based on some very accurate polling, projections or other combination of data and veterans' hunches.

So this is my point:

They are still in full control for the next 18 days.

Who says they're done?

18 days is a lot of time yet for Walker to issue executive orders, or for his appointees to sign off on DNR permits, other agency rules or waivers, DOA annexations, WEDC grants, Workforce Development contracts, limited-term and full-time hires, consulting agreements, construction project change orders, and so on. 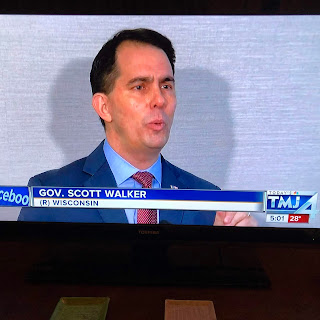 A lot of money can be made in 18 days. A lot of deals can get done and favors withdrawn from the favor bank and cashed in.

You may be planning on going on vacation next week, but the lobbyists and PAC directors and trade association officials who get paid to fulfill their clients needs in and around the State Capitol will be earning their salaries and fees up to the swearing-in.

Remember, it's a government run with 'a chamber of commerce mentality.' And that mentality knows time is money and 18 days is plenty of time for people to make their plays.

So later for the beach and the Magic Kingdom. Right now, it's go-time.

And it's impossible for all the departments and boards and commissions and low-profile fiefdoms and budgets and contingency funds to be monitored from the outside for last-minute activity.

Media reporting staffs have shrunk. Some journalists' beat responsibilities have multiplied, other beats have been abandoned. Much of what state government does routinely goes on behind close doors, so advantage, Walkerite.

And whatever illusions anyone had about honor systems or traditions or fair play by decision-makers got cued off the table when the little men deployed their rule-free dirty pool.

So it would not surprise me that when the Evers, Barnes and Kaul teams show up for work on January 7th, and are officially given the keys and passwords and secret handshakes they come to discover that on Christmas Eve or New Year's Day or ten minutes before Walker's term officially expired that more public money or authority or permissions somehow found their way into the world in a way that will be difficult and costly to retrieve.

Definitely watch out for last-minute WEDC handouts like Kimberly-Clark, which get rubber-stamped by WISGOP-run Finance Committee

I hope they are being sworn into office on Jan 7th. I don't think I could last if Walker was around until Nov 7th. Thanks for all your great blog work. 2017 sure has kept you busy!

Just weeks before Michigan is set to swear in a new secretary of state who campaigned on increasing transparency of money in politics, the lame-duck Michigan House of Representatives voted on Tuesday to pass a bill that would make it a crime for government officials to require nonprofits, including those that spend money on elections and political ads, to disclose their donors.

The bill, SB 1176, has already been passed by the Michigan Senate, so it will now be sent to Gov. Rick Snyder, who has not indicated whether he intends to sign the bill into law or veto it. The House vote was 58-51 and the Senate vote was 25-12.

The bill’s supporters claim that it is intended to protect the privacy of charitable donors, but the legislative text would prohibit state and local agencies from requesting information on donors from “any entity organized under section 501(c) of the internal revenue code,” including (c)(4) social welfare groups and (c)(6) business leagues that, unlike (c)(3) charities, are allowed to spend money on elections.

“This bill calls itself the ‘Personal Privacy Protection Act,’ but the bill is written in such a broad way that it makes me question who it is this bill is really trying to protect,“ Craig Mauger of the Michigan Campaign Finance Network told Michigan House members in testimony delivered on Dec. 13. “If you all truly want to protect the identity of donors to charitable causes and lift up charitable giving in this state and set it apart from political giving, you can do that. You can do it right now. You can amend the bill to cover just 501(c)(3) organizations.”

Under the bill, which is sponsored by Republican Senate Majority Leader-elect Mike Shirkey, the only way state officials would be able to access information about donors to 501(c) nonprofits would be through a court-issued warrant, but even then they would be prohibited from making that information available to the public. The bill would also ban agencies from requiring government contractors to disclose contributions they have made to nonprofits.

Violations of the bill would be punishable by imprisonment for up to 90 days and/or a fine of up to $1,000. https://readsludge.com/2018/12/20/michigan-dark-money-disclosure-crime-passed-house/?fbclid=IwAR0Yaub0_uy34kcH6YZ19Q9KvPAopdftYBBniok21KFavzeGfvTekyAj_0k