'I'm shocked that Mt. Pleasant, nestled in the fake Racine County region of Wisconsin Valley will not be home to an electric vehicle plant' -

said absolutely no one - as the financially and environmentally costly four-year+ Foxconn fantasy fiasco detailed at this archive slogs on:

This 400-item archive has tracked, explained and provided context and commentary for Wisconsin's publicly-awarded and record-breaking package of environmental favors, legal privileges and $4.5 billion in state and local funds to subsidize and assist a Taiwan-based Foxconn factory in rural Racine County, Wisconsin. 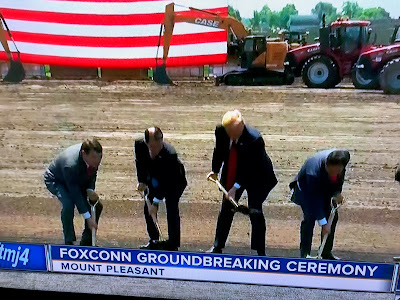 Weigh in Tuesday for transit & against I-94 expansion in Milwaukee

Milwaukeeans and residents statewide can take an action step Tuesday to confront two crises: burgeoning climate change-driven calamities which are flooding media and large swaths of the country, and systematic transportation service deficits in Southeastern Wisconsin which continue to fuel environmental and workforce injustices, too.

Tuesday's public participation opportunity aims to pressure WisDOT to abandon its billion-dollar boondoggle to widen I-94 across Western Milwaukee residential neighborhoods, and create with those public dollars a project which emphasizes transit needs whose neglect has held back countless individuals, families, businesses and an entire region, as the Brookings Institution noted in a major, 2008 report about the entire Great Lakes region.
These few sentences from the report summed up then what cities like Milwaukee needed and still need now,   and presciently shed light on why the proposed I-94 widening adds only retrograde concrete, pollution, stilted 'planning' and lost opportunities, writ large:

To strengthen the economies of the region’s metropolitan areas, the Great Lakes states and the federal government should:

• Design and embrace a new competitive vision for transportation policy that includes high speed rail, greater access to ports and freight hubs, and better maintenance and preservation of existing highway and transit systems

• Rebuild the region’s crumbling water and sewer infrastructure based on a thorough assessment of regional needs and a “fix-it-first” funding strategy that prioritizes existing systems in established communities.

A redefined WISDOT project would force historically unresponsive public agencies to broaden their horizons and correct their harmful, neglectful policies in our region which I have repeatedly catalogued and blogged about:

I am adding to this [2019] post about environmental justice and government-enabled discriminatory planning in SE WI the schedule of an important television documentary about the destruction of African-American homes, business and neighborhood cohesion by I-43 construction from Milwaukee to the northern suburbs....

And had addressed earlier in a January, 2015 item, here.

Say "No" to WisDOT's Billion-Dollar -I-94 Boondoggle

And had expanded up several months ago, here:

Why are we still dreaming about adding expensive 'freeway' [sic] lanes? 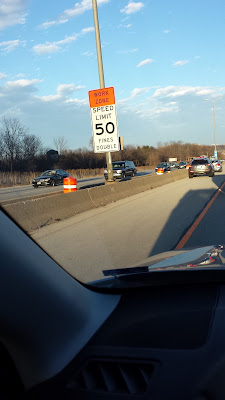 So please note that on Tuesday, September 14, 2021 a coalition of community organizations will hold a Zoom news conference to release an alternative proposal that would force WisDOT to make investments into long-ignored transit agendas and put the agency's weight into the fight against climate change which its preferred, one-dimensional lane expansion 'option' continues to choke.
At great short and long-term costs.
-------------------------------------------

Media advisory: Groups to unveil alternative to I-94 expansion

In response to the proposed expansion of I-94 East West in Milwaukee, a coalition of environmental, faith and transit advocates will hold a virtual press conference on Tuesday, September 14 at 10 a.m. CT to release an alternative, transit-oriented plan that better meets the transportation, accessibility, equity, economic and environmental needs of the greater Milwaukee region.

Leaders from the coalition will share their unique perspectives related to the I-94 expansion and why they are calling for a better solution for Milwaukeeans. The report comes out as the Wisconsin Department of Transportation (WisDOT) begins the public input process for a supplemental environmental review of the proposed highway expansion.

The event will include the following speakers:

Contact Cassie Steiner, 262 930 3963 or cassandra.steiner@sierraclub.org with any technical questions.

This story and headline hit me between the eyes:

The average person is losing about 2.2 years of life expectancy due to air pollution, according to new research by the University of Chicago’s Energy Policy Institute.

Worse, the obvious dangers of a worldwide addiction to fossil fuels are fed and dealt by big corporations and their servants in public offices are old news as shown by the same Chicago research institute's 2018 report:

Fossil fuel-driven particulate air pollution cuts global average life expectancy by 1.8 years per person, according to a new pollution index and accompanying report produced by the Energy Policy Institute at the University of Chicago, [EPIC].

* And do you remember that the Wisconsin DNR -

and the US EPA - separately quickly, and knowingly -  had approved allowing more air pollution over Southeastern Wisconsin - where air quality is regularly degraded.

The US EPA's politically-driven loophole created during the previous administration was closed by team Biden, while the Wisconsin DNR's emission permits remain in Foxconn's hands despite production at the Racine County site that 'justified' the permits - or production of any kind - having never begun.

We are so blasé, we are in such denial about the state of the state and the world that publicly-issued permits to add 800 or so tons of air pollutants annually gather as much concern as a potato chip bag lying in the gutter.

* And air quality harmful to people, businesses and life it self is also a byproduct of an expanding wildfire season raging in the US West - 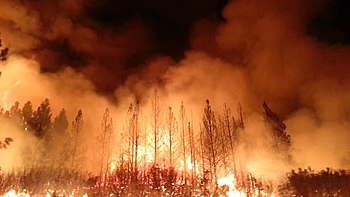 - that right now is as close to Wisconsin as the Minnesota portion of the Boundary waters:

Progress made on northern Minnesota wildfires, but burning could last until snowfall

Climate change is a human-driven crisis, and humans don't have too much time to make a meaningful impact on the head start we've given it.

And people across Louisiana are out of time, thanks to superstorms - wildfires' climate change catastrophic cousin.

These images tell some of that story, and we can only expect next more of this as the Hurricane season, like the west's fire seasons, become more than mere seasonal disasters.