- and the FUBAR Foxconn fiasco in Mt. Pleasant -

Three years later, the factory — and the jobs — don’t exist, and they probably never will.

- and that GOP Assembly Speaker Robin Vos played key roles in launching both of these realities into Wisconsin homes and an exhausted political environment.

Basically, Vos's role in these twin failures speaks volumes about the dangers of power concentrated in a key state position held by an ultra-partisan who keeps betting badly with other people's money and lives that he and his corporatist ideologies know better.

As more attention is focused on Foxconn's failure to provide the payrolls and products it promised in exchange for billions in subsidies engineered by then-Gov. Scott Walker, let's remember that some of us have warned for more than three years that his scheme was a self-serving mirage, with leading local Racine County winner with your money - the incautious homefield booster Robin Vos had been on board from day one:

“Usually if you rush things, FYI, it means the deal stinks,” said Democratic Rep. Gordon Hintz, an opponent of the project who noted that Foxconn has made promises to build factories elsewhere and never followed through.

But Republican Assembly Speaker Robin Vos argued that the project was an “American field of dreams” that will transform the state’s economy and should not be passed up.

Voters in Vos's district have a chance to hold him accountable for his arrogant, hyperbolic miscalculations, but that's not likely to happen. More about that in a few paragraphs.

Then there is the literally-more-painful calamity side-by-side with the Foxconn debacle - the killer pandemic rampaging through the state that keeps producing some of the country's worst data.

Vos, along with GOP Senate Majority Leader Scott Fitzgerald, convinced the State Supreme Court to overturn Gov. Evers' 'Safer-at-Home' COVID-19-prevention order when the virus was not yet out of control here. 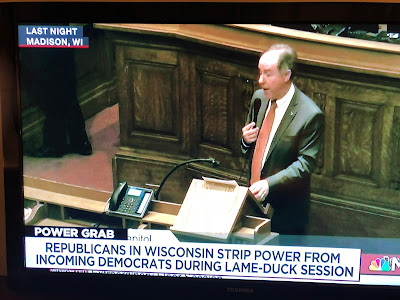 - and the result has been since the Fitzgerald-Vos 'win in May has been a predictable surge in COVID cases, hospitalizations and deaths.

The most-recently reported state COVID-19 data for Monday, October 19 showed new daily cases had spiraled by a factor of 13 to 3,777 in the five months since May 13 - the day of the Court's ruling.

And the state's current reported cumulative COVID-19 case total on Monday of 173,891 has ballooned by a factor of 16 since the 10,902 total cases had been reported on May 13.

So you ask yourself: How is that Vos could exercise this constellation of powers: quick situational litigating, quick situational legislating, and the opposite - stupendously long-delayed policy-making and long-lasting recesses - even during a pandemic.

Some of the explanation is institutional: The Assembly Speaker in Wisconsin is a key cog in Wisconsin's already unusually powerful Legislature and Vos has not been shy about exercising his authority, by, for example:

In all, Republican lawmakers have spent more than $5 million over the last two years on private attorneys at taxpayer expense. The largest part of that amount — $2.1 million — went toward defending lame-duck laws that limited Evers’ powers, according to bills released under the state's public records law.

* Plus and this is important - managing a grotesquely lopsided and self-serving gerrymandered legislative remapping in 2012 that keeps Republican legislators and Vos's GOP colleagues effortlessly in office despite stronger Democratic statewide turnout, as Isthmus explained in 2018.

* And Vos, having had success before, is threatening to do it all over again again - regardless of efforts by Evers and others to open up the process.

"He can form whatever kind of fake, phony, partisan process he wants to create, but I have no doubt in the end we will do it the way we always have, which is to follow the constitution," Republican Assembly Speaker Robin Vos said.

That's vintage Vos - arrogantly on the attack and ready to use his considerable powers - but powers exercised recklessly for partisan advantage can contribute to an unnecessary and unapologetic sacrificing of people's lives - in a pandemic - and the sacrificing of public dollars - for an already wealthy Taiwan-based multi-national business allied with Donald Trump and his re-election strategy, all to chase after corporate canards and phantom jobs under partisan pretenses into filled Racine County wetlands and plowed-under farms.

If anyone can find public purpose or democratic affirmation or serious hope for a repaired Wisconsin in the near future in any of that, feel free to leave a comment.