There is something about the Foxconn 'development' in Racine County that keeps keeps displaying a penchant for parody.

You can begin with Donald Trump saying the promised complex would be The Eighth Wonder of the World. You knew as soon as you heard that there would be heartbreak dead ahead.

Because the days of building destinations like The Great Pyramid of Giza or the Hanging Gardens of Babylon were long gone, especially if the guy who was making the pledge was the same guy had managed to run three casinos into the ground in Atlantic City.

For another thing, Trump, the company and Team Walker decided that the bulldozing of wetlands, homes and farms for this wondrous project would take place in a Village named Mount Pleasant. This image following a not-so-unusual Wisconsin rainstorm after the bulldozing had begun - 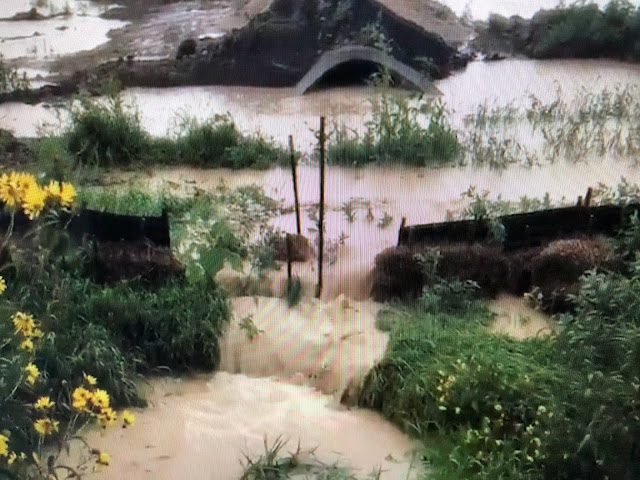 - suggested that something really unpleasant and out of character was taking in Mount Pleasant.

Which was literally undermining the message and the way things had been there.

Then there was Walker's insistence that the bulldozed site and its surroundings were to be known as "Wisconn Valley."

Where he said "a whole 'entire ecosystem" with 13,000 high-paying jobs would be created:

Again; there is no valley there because there is no Wisconn Valley. It's like Narnia or Dune. You can't find it on a legitimate map. I don't even think nearby restaurants had put it on those paper placemats for the kids to color on, if that's still a thing.

Wisconn Valley [sic] was Walker's clumsy effort to associate his expensive campaign prop with California's actual "Silicon Valley." At the expense of an existing agricultural ecosystem. That had to be dug up, hauled away and paved over as part and parcel of one of the most extensive and expensive campaign fantasies, photo ops and government-engineered transfers of wealth in Wisconsin history.

But all Walker accomplished with that dopey word-smithing - and we now that wordy stuff is not his strong suit - was to contrast the world-renown Silicon Valley with his made-up, self-serving imitation that, when said out loud, lands hard at 'con,' just as some of his critics had been alleging.

And now there is this latest bit of punning parody in this Eighth Wonder of the World's continual shape-shifting:

Days before the state declined to give the Foxconn Technology Group tax credits for work done in 2019, officials wrote that the Mount Pleasant facility "may be better suited for demonstration purposes rather than as a viable commercial glass fabrication facility."

To which I say that the project has been a demonstration...of everything imaginable that could be done with public money for partisan purposes by shallow politicians including a GOP President, GOP Governor and GOP legislators at the expense of the land, water, the people's treasury and public trust.

This is probably not the exact definition of 'demonstration purposes' that Walker and the company had in mind, but it's what's been demonstrated by three years of reality checks and failed promises.