Spreading along with the virus's expanding power-patients' list are ironies heretofore never imagined on the eve of the country's most critical decision-making ritual because: 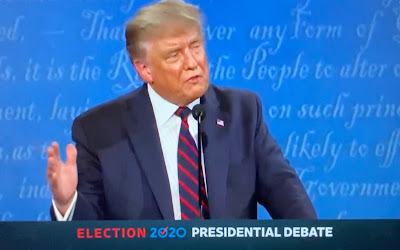 - a tenant who disregarded his decades of hotel and apartment management experience because rules are for losers and suckers invited in a huge crowd of reckless guests for an indoor/outdoor garden party - furthering his defiling of once-treasured grounds - during an epidemic - which devolved into a circular firing squad, and the home's public owners will have to pay all the resulting bills, one way or another.

And, unimaginably, the arrogant party-thrower expects the home's owners to let him stay another four years despite this most recent debacle because he wants to do even more damage in all directions with even fewer restraints and thinks he has all the cops and lawyers and judges in his pocket to help him get away with his perverse amusements free and clear.

You're tempted to say 'no way,' not after this carnage - but then you remember people said the same 'it'll never happen' thing four years ago, and that was before the reckless party-thrower, and his loyal, well-placed family members and a vast, cultish clutch of underlings (with vigilantes standing by) gained access to the vast resources and weaponry stashed in the unusual home's architecture.

We'll know in a month - think of it as the beginning of the lease’s 30-day notification clock - if the destructive mob and its boss can bulldoze and cheat their way inside again using force, various forms of chicanery and perhaps through the sewers, of if a saner, smarter group of occupants which knows its limits is able move in, expel the interlopers and clean the place up.