It's assessment time, as WI is hard hit by COVID & drunkenness, too

It will surprise no one that the Tavern League of Wisconsin instantly got a judge in far northwestern Sawyer County to suspend Gov. Evers' COVID-19-prevention order limiting capacity in bars and other other gathering spots.

After all, the organization had earlier filed a brief in support of litigation brought by GOP legislative leaders in the spring which led to the State Supreme Court killing an extension of Gov. Evers's 'Safer-at-Home' order, noted here.

It's worth noting that geography and minimal population density have spared Sawyer County much of COVID-19's grim realities which have swamped Wisconsin statewide.

The entire county has less than 17,000 people - that's equal to one-third the residents in a single City of Milwaukee Common Council district - and up-to-date data for Sawyer County show only 288 positive virus cases there and a single death while the state's COVID-19 tallies show more than 164,000 positive cases and 1,500 fatalities.

In fact, the same data show that Wisconsin reported 33 COVID-19 deaths reported today, Wednesday - two more than the 31 people who died in the crash of Midwest Express 105 in Milwaukee 35 years ago, and that tragedy led the news for weeks.

And if Wisconsin's calamitous COVID-19 body count remains on its current deadly path - something AWOL Republican legislative leaders care less about it than how Donald Trump's polling is going here - Wisconsin will keep setting more COVID-19 records and the number 33 will be insignificant and forgotten.

Too harsh a judgement? Remember that Racine County GOP State Senator Van Wanggaard recently said the state's ballooning COVID-19 data could explode by a factor of ten and he still wouldn't support a masking order.

Pesky experts who have spent decades studying how killer viruses spread and recommending simple public health methods to combat them have pointed to bars as especially risky places to hang out in a pandemic.

But the same incautious mentality that has kept a first-time drunken driving offense at the traffic ticket level in a state historically damaged by alcohol abuse is tying the hands of Wisconsin officials who are trying to slow down the COVID-19 rampage which GOP enablers have helped keep the Badger State among the hottest of the country's virus hotspots.

And it's been this way for months, as Urban Milwaukee noted in July!

Wisconsin’s COVID-19 reproductive rate, the number of people expected to be newly infected from a single confirmed case, is now the worst in the nation.

As Wisconsin keeps setting new Badger State records for daily COVID-19 caseloads and deaths, I noticed the other day that the moderate Republican and AM620 radio talk show host Steven Scafiddi - the former Mayor of Oak Creek, so with a public service background - had noted the overlap between Wisconsin communities with spiking COVID-19 cases and a national list of America's drunkest cities.

WTMJ AM radio show host Stephen Scaffidi
@WTMJSteve
on October 12 put the COVID-19 and the drunken cities lists together in a Tweet:

Eerily close to the 12 Wisconsin cities that make the top 20 drunkest cities in America.
Quote Tweet

Here are the lists Scafiddi had referenced:

*The Journal Sentinel's report that there are ten Wisconsin metro areas on a list of the nation's 20 leading COVID-19 hotspots:

Wisconsin now has 10 of the top 20 metro areas with the highest infection rates in the country, according to an analysis by The New York Times. Those areas are Oshkosh-Neenah, Appleton, Green Bay, Sheboygan, Manitowoc, Wausau-Weston, Marinette, Beaver Dam, Fond du Lac and Platteville, the analysis shows.

Nothing to boast about: 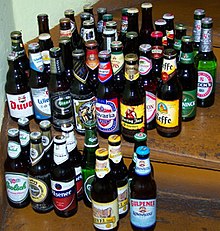 I hope more policy-and-opinion-makers look further into whether the spread of COVID-19 in Wisconsin is related to what we know as the 'drinking culture' here.

I can't think of a more qualified expert on such matters to lead a COVID-Contamination-Culture probe than WI GOP Assembly Speaker Robin Vos, since he was the first legislator who said cultural practices by certain people were spreading the disease in his home County of Racine.

In secret recording, Vos says immigrant 'culture' was to blame for COVID-19 outbreak in Racine County

This is how you do public policy in a pandemic:

* Have a Mayor like Tom Barrett who is leading on COVID safety rather than putting special interests above public health.

* Helping organize free flu shots and COVID-19 tests at the same time, since the cold-weather flu season will likely push COVID sickness and death numbers into the stratosphere.