Let's hope we never get a chance to find out if Van Wanggaard was serious or merely workshopping some stand-up material for his caucus's first meeting perhaps after the election following a seven-month, taxpayer-paid hibernation.

But it's worth noting that in the 22 days since Van Wanggaard thumbed his nose at mass illness, Wisconsin's positive cases exploded to 214,996 from 141,830 - an increase of just over 50%, according to the state's COVID dashboard. (Also reproduced below)

And Van Wanggaard's party is still fighting Gov. Evers' moves to tamp down those numbers.

I wonder if Van Wanggaard also knows or cares that the current state data show Wisconsin's COVID case count only needed four and a half months for a ten-fold jump since the June 10th tally of 21,593, and that figure is ten times larger than April 4th's total of 2,112.

The GOP-led Wisconsin Legislature last passed a bill on April 15 when the state COVID dashboard displayed 3.721 cases statewide, and now Wisconsin has close to 60 times that number.

And let's not forget that the right-wingers on the Wisconsin Supreme Court killed Evers' 'Safer-at-Home' order extension on May 13, when the state data dashboard had tallied 10,902 COVID-19 cases. Since then, cases haven't just leaped ten-fold - they increased by a factor of about than 20, and victimized regular folks, too!

Which is why the chart from the state's COVID data dashboard below represents the opposite of a flattened curve, despite what Trump has falsely said about successfully rounding the bend or flattening the curve despite equally horrifying national numbers to which Wisconsin's reckless right-wingers have contributed mightily.

Wisconsin's COVID-19 reporting began with 32 cases on March 15; I wonder if Van Wanggaard would have said a week before spring began that he wouldn't support a state masking order even if Wisconsin's COVID-19 case load before Halloween were to increase by a factor of 6,700? 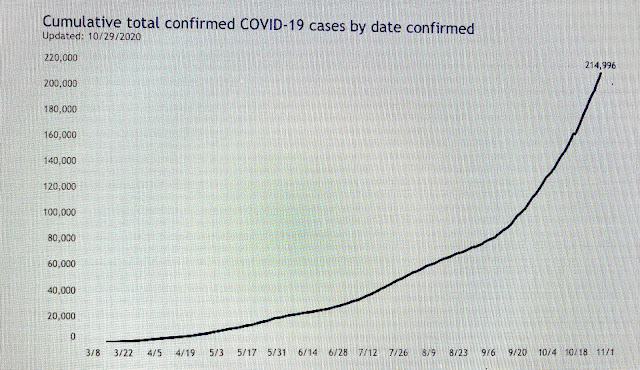