Vos wins a water steward award. And now for the rest of the story.

Wisconsin's GOP-run Legislature will soon end its seventh-month of intentional inactivity while the rampaging pandemic is killing a Wisconsinite every thirty-minutes and sickening 175 people here every hour.

So it's good to know that that GOP Assembly Speaker and high-profile FTV (Friend of The Virus) Robin Vos has an opponent - Joel Jacobsen - who is so well-funded that career-politician Vos by his own admission has been forced into a first-ever paid-ad campaign to hold on to his sweet taxpayer-paid gig:

Vos (R-Rochester) is the target of an onslaught of more than $300,000 in digital and TV ads and mailers by Democrats and their allies, who are suggesting that the longtime legislative leader is vulnerable.

In response, Vos has purchased some $70,000 worth of cable TV ads to defend his record and attack his opponent, something that he said he has never done in his 15-year political career.

But, not to worry- we learn via his official taxpayer-supported Twitter feed that Vos had some good news lately, too:

And was able to tweet on October 15th as election season rolls to a close that a prize patrol had come through:

Thank you
@WIWaterAlliance
for the recognition. I'm proud of the work done by the Speaker's Task Force on Water Quality to to protect, preserve and promote clean water in #Wisconsin. #WisconsinWater
Quote Tweet

Now, you ask, along with only 'named an Outstanding Water Legislator' and not The Water Legislator of the Year...how is it possible that Vos could win this award and also have served as a key Walker water-carrying ally when state waterway pollution skyrocketed, phosphorous discharge rules were weakened, toxic mining laws were rolled back, big feedlot inspections were reduced, rivers like the Little Plover were damaged and rural kitchen taps kept running brown?

In fact, the mutual and vigorous mutual backscratching between Vos and the state's biggest ag and dairy special interests at the public's expense has there for all to see:

As Wisconsin's GOP legislature goes to war with the Evers administration over long-overdue ag manure-control rules, let's have a records check.

As an addendum to posts on this blog about GOP objections to WI livestock siting rules which have stalled and appear to have cost Gov. Evers his Ag department secretary nominee, I want to add some relevant correspondence, below.

It makes clear they are attacking the proposed rules, and Ag Secretary-nominee Brad Pfaff, and, by implication, Gov. Evers on behalf of industrial scale feeding operations known as CAFOs - a special interest with a history of air and water pollution - consequences which, coincidentally, will be aired at hearings next week.

Remember that major ag special interests, regardless of what runs to the land and into the water, have enjoyed special relationships with Walker, the DNR, and legislators (see the hand-delivered marching orders they received, here), and it appears that Evers is being steamrolled, regardless of the 2018 election.

And then you remember that the Wisconsin Democracy Campaign in 2017 showed us that the innocently-named Wisconsin Water Alliance represents big groundwater users with a board stacked with Walkerites, righty activists and business bigwigs.

A new group that says it supports policies to protect the state’s waters appears to be a front group with ties to powerful business, agriculture and manufacturing interests.

And the Alliance's President is Mike Huebsch, who was GOP Assembly Speaker before Vos.

So this 'award' is really just the output of one of Wisconsin's overlapping conservative networks enabling Vos to pose as a friend of the environment in his campaign's closing days.

Which some would call fake news.

Speaker Robin Vos
@SpeakerVos
·
Oct 15
Thank you
@WIWaterAlliance
for the recognition. I'm proud of the work done by the Speaker's Task Force on Water Quality to to protect, preserve and promote clean water in #Wisconsin. #WisconsinWater
Quote Tweet 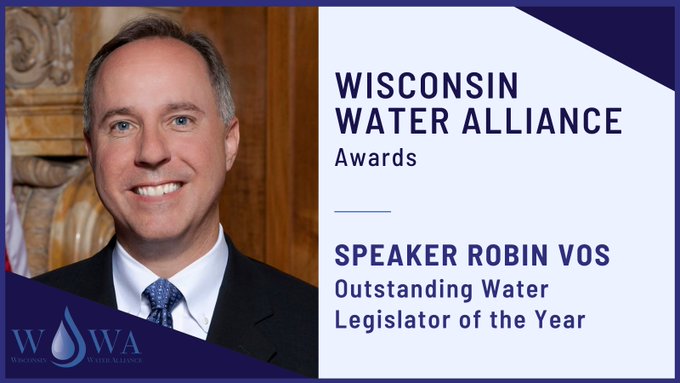