Trump is playing Ahab. On actual steroids. We hope for a better outcome. 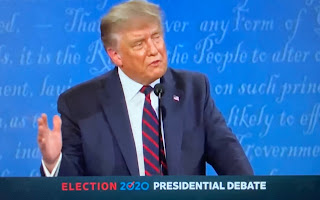 resembles the monomaniacal Captain Ahab in Melville's classic novel Moby Dick, except that Ahab only had a single ship and crew to sink while Trump is jeopardizing a democracy, a populace reeling from discrimination and disease, and the most important economy in a highly-interconnected world.

And our Ahab-on-literal-steriods can authorize the launch of an arsenal of nuclear weapons in less than five minutes, with no one to stop him.

Before 2016, no reputable publishing house would have invested a penny in a manuscript based on such an absurdist Melvillian ripoff because no one would have bought it.

Because, you know, this is America, the greatest democracy ever seen, where the people are supposed to rule.

And, yet, here we are in real time and real life, with the biggest question being, 'if, and when he loses, can Trump steal back the Presidency through force, more fear-mongering, vigilante assistance and the corruption of the Justice Department, Supreme Court and Electorate College.'

I think it's an open question and we won't know the answer, or what's left of what we had, until Inauguration Day, January 20, 2021.