- and Walker's DNR had fast-tracked the air pollution and Great Lakes diversion permissions the company said were essential to the manufacturing which now looks even less likely - isn't it time for Wisconsin to remove Foxconn's special wetlands-fill abilities, restore integrity to the DNR's environmental oversight obligations and suspend those permits, especially the approval of a Great Lakes diversion which was always a dubious ask under the Great Lakes Compact?

A history of the diversion approval is here, courtesy of Midwest Environmental Advocates:

The State of Wisconsin has exempted the Foxconn project from several state environmental regulations, including the law requiring the State to prepare an assessment of the overall impact of the project on the human environment (referred to as an Environmental Impact Statement). However, Foxconn will still need to obtain a number of permits and approvals from the DNR before it can begin operating:

The DNR approved the City of Racine’s application to divert up to 7 million gallons per day of Great Lakes water to Foxconn’s manufacturing plant and the surrounding area. The DNR decided that the proposal meets the strict standards for granting an exception to the Great Lakes Compact’s ban on diversions.

To simply the issues: does a so-called 'demonstration' facility need the special legal, air, land, water, and regulatory exemptions which a factory that was politically-created-and-touted by Trump and his partisans as The Eight Wonder of the World theoretically could require?

Here is one archival blog post with 15 items which examines the permits, their histories, and some implications, including this April, 2018 posting:

Though nothing of substance can't be done to unwind the whopping, high-powered electrical grid upgrades added to the site which the PSC spread widely across everyday electrical customers, or put back together lost prime ag lands 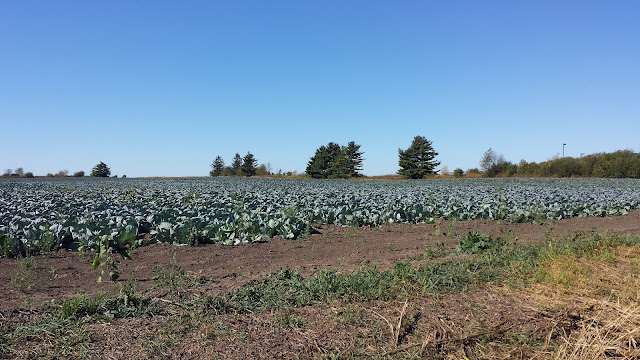 Cabbage fields on the Foxconn site, 2017

and bulldozed homes, or to the state transportation budget that expended hundreds of millions of dollars sprawl-inducing widened interchanges, new lanes and ancillary roads in serving a shrinking "campus" that was supposed to alter a low-density environment.

Here is a link to an archive on this blog that was begun in June, 2017 and is approaching 400 posts: