Rational Wisconsinites - partisan or solidly independent but with a normal share of concern for their fellow citizens, neighborhoods and state - may be somewhere between baffled or outraged by the deadly paradox between the the state's overwhelmingly Republican legislature remaining on its nearly-six-month long paid vacation while a statewide COVID-19 virus epidemic

again overwhelms Wisconsin hospitals and drives the victim-counts near the top of the national tally:

The answer to the riddle is that to the Wisconsin's GOP legislators, inertia in the face of escalating disease and death is no contradiction at all.

It's the logical outcome of Ronald Reagan's sloppy 'government is not the solution to our to problems, it IS the problem,' slogan and Grover Norquist's even more contemptible 'drown [government] in a bathtub' bumpersticker.

So better for the Republicans to obstruct or cut public funding and services as a routine whenever possible (with self-serving exceptions to be noted, below), because public servants agencies able to quickly a deal with a healthcare crisis just might also successfully add value for the people to school systems, environmental protection, justice agencies, policing and even the easier provision of health insurance and treatments to everyone.

To be fair, Wisconsin Republicans proved they could act with breakneck speed to boost the re-election chances of former Gov. Walker by shoveling billions of state and local taxpayer dollars to the Taiwan-based electronics giant Foxconn whose operations are centralized in China and India.

Three years later, Walker is out of office and not a single promised flat-screen device has been produced on the Racine County farm and wetlands which were bulldozed at the company's request.

The GOP Walkerites who ram-rodded through that historic taxpayer-dollar giveaway - along with special, fast-track access to state courts, suspension of environmental reviews and fresh, tazpayer-paid highway overbuilding - continue to excuse Foxconn's 'performance' and ignore Walker's promise that the project would create at least 13,000 high-paying blue collar jobs.

You can read a full, 40-month accounting of Foxconn matters - which is also a primer on the definition of Wisconsin Republican 'philosophy' - here.

Implemented by the same group of self-serving partisans who remain officially inert - but collecting full pay and benefits - while the killer COVID virus crisis is now sickening more than 120 new Wisconsin victims every hour:

The latest numbers come just one day after the state set a grim record with 27 deaths reported Wednesday. 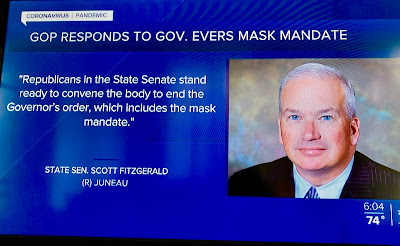 2. Because Evers had the temerity to send Walker packing, so the WI GOP simply extends its never-do-anything which might validate a Democratic Governor to do-nothing to save lives statewide - even in reliable red counties - because some random Democrats at the supermarket might inadvertently be saved from an infected cough by a 75-cent paper face mask.

I'm so old that I can remember when Wisconsin actually had a Legislature.

The pathetic Republicans face a paradox. If they choose to fight Ever's Order, which the cowards can by simply holding a session and voting it down, they would have to meet at the capital. If they meet in Madison they would leave their homes, which they are being "safer at home" in. They would need to wear masks, but they can't wear mask because that means they would be in agreement with Evers. If they do not, they may have an outbreak and prove Evers right. Their only choice is to do nothing and let the disease spread. If a bunch of high risk people die, that is ok, at least its not them. If a bunch of kids get sick, hey, thats ok, as long as its not their kids (they may still not care). I am convinced the antichristian GOP is the party of prodeath. I am sure that they are actually ok with a lot of people dying off as long as they live to worship their god, Trump.

Well, if the Wisc. GOP "leaders" get tired of blaming everything WRT the election on the Dems (hint: they won't), well, then they can blame THE SAUSAGES!

Oh, my gawd. Have you ever heard of anything so stupid??

Our republican controlled legislators are clueless. The president of the Minnesota Federal Reserve Bank has stated, "until COVID is brought under control the economy can't recover." Yet our republican representatives think saving the economy just means keeping everything open, how big a hit to the economy be with the continued loss of wage earners and spenders?

They have no intentions of saving the economy. They care about one thing and that is getting their payout from their handlers. The end goal is really simple, to keep Republicans in power. If they can sway even a handful of ill-informed voters by blaming Evers, mission accomplished. All the handlers want is to not pay taxes. Ex., Dianne Hendricks is scared to death that Biden could tax her. Look at our GOP US Congressmen and Senator. Do you really think any one of them has a brain or the morals to think and act for themselves? Johnson (dumb), Grothman (moron), Tiffany (idiot). When I looked at Tiffany's website in the latest election, two of the main issues he stood on were 1) supporting Trump 2) cutting the deficit. Only a blooming idiot would not understand the dilemma. This was before Covid.