3:20 p.m. Update - the Covid situation in Wisconsin is worsening by the hour:

Republicans in Wisconsin occasionally step out of the shadows and unmask 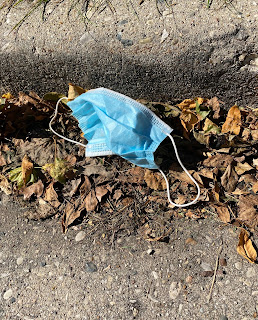 a truth which would shock your everyday Sunday School teacher.

There was then-GOP Governor Scott Walker's anti-urban dog whistle to an exurban Waukesha County audience towards the end of his 2012 recall election:

People do not want to see Wisconsin "become another Milwaukee," Walker said.

"If we win this battle, and the money is not there under the auspices of the unions, certainly what you’re going to find is President Obama is going to have a much difficult, much more difficult time getting elected and winning the state of Wisconsin."

And there was a more recent admission by a GOP strategist to his Wisconsin helpers that voter suppression has always been in the party's traditional playbook:

Leaked audio reveals a top adviser to Trump's 2020 re-election campaign said "traditionally it's always been Republicans suppressing votes in places" during an event for Wisconsin Republicans.

Now we have a fresh outbreak of stunning-and-callous transparency in the midst of the COVID-19 epidemic in super US hotspot Wisconsin where the contagion has already sickened more 146,000 people and killed 1,427, along with ballooning state the state's unemployment rolls and Wisconsin hospital admissions:

I want to thank fine reporting by the Milwaukee Journal Sentinel for getting remarks on the record by Racine's GOP State Sen. Van Wanggaard about COVID-19 issues and the GOP-controlled Legislature which has been unwilling to meet for six months as the epidemic has raged here.

(The Journal Sentinel's story is behind its subscriber-only paywall; I hope the paper soon puts it out on the more accessible portion of its website so everyone can get the benefit of the paper's reporting. I understand the paywall and I'm happy to be a subscriber to help keep local newspaper reporting alive).

While most of his colleagues were unwilling to talk to the paper on the record about COVID-19 and legislating, Van Wanggaard said that the GOP-controlled Legislature will meet after the November election...to kill Gov. Evers' emergency COVID-19 orders if litigation GOP leaders have joined hasn't by then convinced Wisconsin's judiciary to get the job done.

Which means Republican legislators will continue to evade any accountability in legislative chambers and at the polls for the virus's escalating suffering which in Van Wanggaard's home county has already spawned 5,933 cases (433 just last week alone) and 98 deaths, data show.

In fact, Van Wangaard said he'd stand on a point of ideology against Evers' mask order even if COVID-19 tallies absolutely exploded:

He said he wouldn't back a mask requirement even if COVID-19 becomes 10 times worse than it is now. Wisconsin now has an average of 2,300 new cases per day — an increase of 180% over a month ago, according to the state Department of Health Services....“Nobody should be dictating to me when I have to wear a mask.”

In recent years, my wife’s and my main source of news has been digital subscriptions to the Washington Post and the New York Times, as well as NPR. We haven’t gotten the Milwaukee Journal Sentinel for many, many years because of what I considered a somewhat conservative bent to their reporting.

However, over the summer my wife signed us up for a trial subscription to the Journal Sentinel, with digital access and home delivery of the Sunday and Wednesday editions. I must say, I have been very impressed with the reporting. The news coverage seems to have no political leaning in either direction and is in-depth and factual. I understand that the MJS is no longer locally owned, but that may be part of the improvement. With the increased funding of the USA Today national network, perhaps they no longer feel the need to kiss up to their wealthier subscribers in the WOW counties? Not sure. In any case, we have increased our home delivery to include the Friday and Saturday editions too. It is a pleasure to sit and read a “paper paper” again. Especially a local one employing local journalists.