While Trump's dictator behavior at Tuesday's 'debate' is fresh in swing-state Wisconsin's collective consciousness, another threatening round of his dangerous self-centeredness is headed our way:

Trump has scheduled rallies for Saturday in La Crosse and Green Bay...which are COVID-19 hotspot population centers...in counties wracked by the virus...in a state near the top of the list nationally for surging COVID-19 caseloads...driven by reckless personal choices enabled by right-wing Wisconsin Republicans and elected officials who for months have given the virus an easy pass statewide in all directions.

Social distancing and mask wearing are simple, low-cost and effective ways to stem the pandemic, but doing the opposite at Trump rallies is one way some of backers visually validate his contempt for the experts, as was seen when Trump rallied his supporters recently in Marathon County: 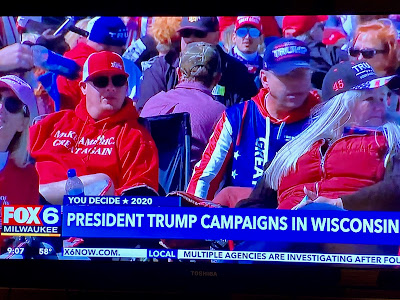 So, coming right at you, La Crosse and Green Bay, because the virus is Trump.

I would also point out that the Packers play a home game in Green Bay Monday night.

Given the psychological and historical importance of the team in the city and state, you'd think that nothing would be more vital right now in Green Bay than smart, teachable pandemic prevention because many players and team employees live there.

But Trump and his enablers have other priorities, so apparently not.