Democrats on the Wisconsin Legislature's budget-writing committee have raised questions in writing to Wisconsin DNR Secretary and Scott Walker chief 'chamber of commerce mentality' implementing tool Cathy Stepp about her proposal to continue raising state parks fees and offer corporate sponsors signage or other perks in the parks following the Walker administration's earlier elimination of state operating support for the state park system:

"...we are concerned that this approach to continually increase fees for Wisconsin families and sell out our parks to private companies is short-sighted and will not be sustainable," the legislators said, in part.

I will reprint the letter at the end of this posting, but first point you to two items for context: 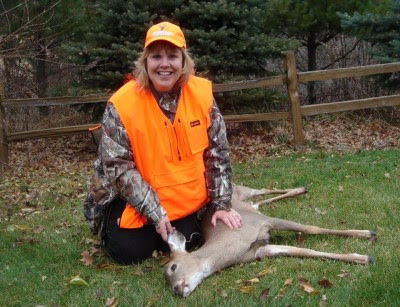 - - Scott Walker and their fee-happy, fake-friends-of-the-working-family GOP legislative allies have foisted on our formerly progressive state are looking to a) again raise state parks fees and, b) raise more money to replace the tax dollars they stripped from the DNR budget by, c) selling signage space so sponsoring corporations can welcome you to your favorite state park or trail.

Imagine setting up camp or heading off into the north woods with a billboard greeting or sendoff from the good folks who want to sell you triple-decker bacon burgers, gasoline, weedkiller, or ED pills.

*  And remember that Stepp recently blew off legislators of her own party as well as the non-partisan Legislative Fiscal Bureau by declining to answer questions about about the state's wastewater treatment planning - - a pattern of non-compliance echoing Walker and DNR disregard of the US Clean Water Act for five years.

We recently received your agency’s report outlining potential revenue options to address the budget shortfall facing the Wisconsin State Park System for the 2017-19 State Budget. We appreciate the opportunity to review the revenue proposals in this report.

During the 2015-17 State Budget when the Republicans serving on the Joint Committee on Finance (JFC) voted to remove all state funds from the State Park System we voiced many concerns, including that the cut would result in a structural budget imbalance in the Parks Account. The nonpartisan Legislative Fiscal Bureau (LFB) highlighted at the time that increases in fees would not sustain the 28% cut in funding and estimated a structural deficit of $1.4 million in the Parks Account. Due to this estimate being based on prior years, we would like to request updated numbers on actual revenue and park attendance from the DNR for 2015-16 to better examine the impact of the revenue options you proposed.

In providing potential revenue options for state parks going forward, your report includes important considerations including recreational and camping use trends, future population demographics, technology and modernization. However, many of these considerations seem to be in conflict with each other with the funding decisions recently made. For example, increasing the number of campsites with electrical hook-ups will require increased state funding. This is in addition to the fact that the state is already tens of millions of dollars behind in deferred maintenance projects and upgrades. Acknowledging the importance of investing in the modernization and quality of our state parks while at the same time eliminating state funding seems counterintuitive.

In addition, your report also ignores any discussion of the impact of the increased financial burden on access and overall attendance. The revenue options you propose make up the shortfall by putting an additional burden on Wisconsin families that for decades have been able to enjoy our natural resources and heritage without significant financial constraint. By continuing to raise fees you are making the State Park System accessible only to those who can afford it. Do any of the revenue projections provided consider lower attendance?

Your report proposes an increase in campsite fees up to an additional $5 a night, increasing admission prices up to $5 a day, and electrifying more campsites to increase per night costs. Continually increasing fees in this way could deter more and more families from camping and spending time in our State Parks. You stated that “the park system works to draw new customers to camping and outdoor recreation.” But, how many times can you raise fees before it becomes unaffordable for Wisconsin families?

Your report also proposes merchandizing the state parks by securing intellectual property rights through trademark and copyright patents in sponsorships and advertising. Selling our state park names and brands to private companies is a mistake that other parks have already made and one that we should not consider in Wisconsin. When this was brought up last budget cycle, the LFB gave examples of California and Virginia where self-sustaining parks did not work and pointed to a National Conference of State Legislatures report that stated, "Although revenues from park admission fees, camping fees, golf course charges and restaurants can help fill the gaps, outside of certain very popular parks, they are not enough to make parks self-sustaining."  This is especially true if you consider the modernization upgrades that future demographics desire and the deferred maintenance that will need to be funded in order to maintain the quality in our state parks that make them a destination.

These recommendations are troubling because Wisconsin’s State Parks attract millions of visitors and contribute more than $1 billion annually to the state’s economy. State parks increase tourism and provide economic benefits to surrounding communities through visitor spending on gas, food, lodging, recreational equipment and guide services. The decision to eliminate all state funding appears to be driven by ideological principle rather than good economic and fiscal policy. Considering the economic and quality of life benefit to state residents, a strong case could be made for additional state investment in our parks that does not discourage access by individual users. Given the mandate from Governor Walker to make our State Park System self-sustaining, we are concerned that this approach to continually increase fees for Wisconsin families and sell out our parks to private companies is short-sighted and will not be sustainable.

Thank you again for taking the time to read through our concerns on the DNR’s revenue options for the Wisconsin State Park System.  We appreciate your attention to this matter and look forward to reviewing updated numbers on actual revenue and park attendance from the DNR for 2015-16.