[Updated from 6/10] This blog has posted many items about the ongoing failure by the Wisconsin DNR under Scott Walker to keep state waters free of toxic manure; this very serious, comprehensive and independent study released Wednesday confirms what we already know, reports the Green Bay Press-Gazette:

The 137-page report accuses the Wisconsin Department of Natural Resources of neglecting to act when presented with evidence of widespread spills, intentional discharges and the over-spreading of manure by 16 large dairy and beef farms in Kewaunee County.

"The county's industrial (consolidated animal feeding operations) have run roughshod over the state's clean water laws, all too often ignoring their permits and operating with impunity," the report's authors wrote.

Additionally - - your right to clean water is just that in Wisconsin. A right. Not a privilege or paid benefit, like an admission ticket to a water park at The Dells.

A right - - guaranteed by Article IX of the Wisconsin Constitution and the Wisconsin Supreme Court - - described by an authority no less relevant than the very DNR that has been forced to look the other way by the "chamber of commerce mentality" special interest insiders Scott Walker installed atop the DNR.

I always urge people to read the DNR's webpage on The Public Trust Doctrine. The legal concept dates in the US to the Northwest Ordinance of 1787 - - predating the Wisconsin Constitution and statehood here - - and back to Roman times. Such is the importance to people of open access to water.

Here is the DNR webpage on its website, and I will also copy out the text - - (some graphics may not reproduce, like links to videos, but go to the page and access them) - - because I fear the information will be scrubbed away, as was the agency's climate change content once Walker replaced Gov. Doyle. 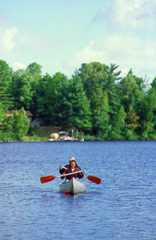 Wisconsin's Waters Belong to Everyone

Wisconsin lakes and rivers are public resources, owned in common by all Wisconsin citizens under the state's Public Trust Doctrine. Based on the state constitution, this doctrine has been further defined by case law and statute. It declares that all navigable waters are "common highways and forever free", and held in trust by the Department of Natural Resources.

As a result, the public interest, once primarily interpreted to protect public rights to transportation on navigable waters, has been broadened to include protected public rights to water quality and quantity, recreational activities, and scenic beauty.(1)
All Wisconsin citizens have the right to boat, fish, hunt, ice skate, and swim on navigable waters, as well as enjoy the natural scenic beauty of navigable waters, and enjoy the quality and quantity of water that supports those uses.(2)
Wisconsin law recognizes that owners of lands bordering lakes and rivers - "riparian" owners - hold rights in the water next to their property. These riparian rights include the use of the shoreline, reasonable use of the water, and a right to access the water. However, the Wisconsin State Supreme Court has ruled that when conflicts occur between the rights of riparian owners and public rights, the public's rights are primary and the riparian owner's secondary.(1)
What are Wisconsin's stream and lake access laws?
Wisconsin's Public Trust Doctrine requires the state to intervene to protect public rights in the commercial or recreational use of navigable waters. The DNR, as the state agent charged with this responsibility, can do so through permitting requirements for water projects, through court action to stop nuisances in navigable waters, and through statutes authorizing local zoning ordinances that limit development along navigable waterways.
The court has ruled that DNR staff, when they review projects that could impact Wisconsin lakes and rivers, must consider the cumulative impacts of individual projects in their decisions. "A little fill here and there may seem to be nothing to become excited about. But one fill, though comparatively inconsequential, may lead to another, and another, and before long a great body may be eaten away until it may no longer exist.  Our navigable waters are a precious natural heritage, once gone, they disappear forever," wrote the Wisconsin State Supreme Court justices in their opinion resolving Hixon v. PSC.(2)
Sources: (1) Quick, John. 1994. The Public Trust Doctrine in Wisconsin. Wisconsin Environmental Law Journal, Vol. 1, No. 1.
(2) "Champions of the Public Trust, A History of Water Use in Wisconsin" study guide. 1995. Wisconsin Department of Natural Resources Bureau of Water Regulation and Zoning. Champions of the Public Trust [PDF].
Last revised: Thursday October 31 2013

How much money have these farms given Scott Walker? Anything more than $1.00 and you can be sure that there will never be any enforcement actions by the WDNR against these huge polluters.

If there were any WDNR scientists studying or monitoring the massive manure spills from these farms, those scientists will all be fired as of July 1st and their research and documentation of these farms' wrongdoing wiped from their computers.

With the DNR looking the other way, Chris and Rodney Kinnard got a pretty good deal from their relatively small donations to Walker:

Kinnards is one of 15 permitted CAFOs in Kewaunee County. I urge people to look at the report and see how much money is being paid to millionaire farmers in just one of 72 counties in Wisconsin. And the fact that there is little or no money spent by these farmers to clean up their farms even after they have been ordered to do so is disgusting.

Keewaunee County voted for Walker by 20% and ejects nutjobs like Andre Jacques and Frank Lassee to the Legislature.

This isn't just about contaminated wells for rural residents who might vote GOP. And it isn't just Kewaunee County. This is about industrial farm operators refusing to do what is necessary to protect a resource owned by everyone because they want higher profits. I believe Jake would say they are not paying for the external costs of doing business. Private profits at public cost. We own the groundwater but the DNR is letting private businesses get away with destroying it so they can profit a little bit more. And because groundwater is connected to lakes and streams, surface waters are being loaded with manure too. How selfish and short-sighted are the people who wrote these laws?

To add insult to injury, these "farmers" are taking taxpayer subsidies and contributing to GOP candidates. That looks like money laundering to me.

Yep, unfettered greed and corruption to a T. The question is : "Why do so many people in Kewaunee County that aren't part of that inner circle allow it to go on?"

I wish that the public trust doctrine could sway radical right wing thinking in the Northwoods: