Daniel Kaufman, author of The Fall of Wisconsin, published a major report Saturday about the politics and implications of the Foxconn deal in The New Yorker.


Did Scott Walker and Donald Trump Deal Away the Governor’s Race to Foxconn?

At Walker’s request, Scott Pruitt, then the head of the Environmental Protection Agency, overruled the objections of his staff to grant most of southeastern Wisconsin an exemption from limits on smog pollution.

The New York Times also on Saturday posted separately another piece with a Wisconsin dateline about contaminated drinking water:

ARMENIA, Wis. — The groundwater that once ran cool and clean from taps in this Midwestern farming town is now laced with contaminants and fear. People refuse to drink it. They won’t brush their teeth with it. They dread taking showers.

Rural communities call it their own, private Flint— a diffuse, creeping water crisis tied to industrial farms and slack regulations that for years has tainted thousands of residential wells across the Midwest and beyond.

We in Wisconsin have been living these stories, drowning in the coverage, whether about Foxconn, or polluted water in Kewaunee County, or in the Central Sands where The New York Times stopped by, or the donor-driven privatization of state parkland for a developer, or Walker's calculated, coordinated attack on the state's environment since his first day in office:

I had been calling Scott Walker's radical environmental approach the Cut It, Gut It, Pave it, Fill It plan.

[Update: Walker has signed a special wetland-filling bill for one of his donors after he'd already suspended the DNR's permit review which had held up the development.]

No doubt your friends will call Sunday and say, 'Hey, what the heck happened to your state?'

And you will say, "Haven't you been listening to me all these years about Walker and the polluters he's put in charge?"

And don't you want to call them Tuesday night and  say, "Hey, we finally knocked the guy out. And replaced him with a teacher 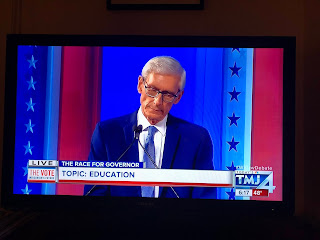 who's got science degrees.'

This is doable. We don't have to be the subject of these kinds of grim stories  about livestock manure in the water or people being thrown off their land or from bulldozed houses for Foxconn at taxpayer expense anymore.

We don't have to be the right-wing's laboratory for dirty government.

Take back the state. Let a citizens' restoration begin.

Even given you are an experienced newspaper man, I don't get this point. The story the media across Wisconsin is pro-Walker and Pro-Trump and is not in supporting change.

It is too easy, if one lives in Milwaukee or Madison, to follow Sheppard Express or Urban Milwuakee, Milwaukee Courrier, Milwaukee Community Journal, or the few honest bones thrown out by Walker's BBF MJS. Likewise, Ithsmus and WSJ may create the illusion that the media will empower Wisconsin voters to overwhelmingly vote for change.

You must not see Janesville Gazette, Ripon Commonwealth, Jefferson Daily County Union, and the many rightwing local papers that endorse Walker. People seem to forget that the old Cap Times is literally nothing more than a weekly insert featured by rightwing daily newspaper chain.

There are blogs like this - all of which I read - the number has dwindled since John Nichol's "Wisconsin Uprising" (tm). If Evers wins, it will be in-spite if the media that created the myth of Scott Walker as an all-powerful political genius.

Heck, even rightwing national media would not get behind this fool that ran for President claiming we needed TWO walls, one of which would border Canada, the longest continuous border in the world!

Walker made Wisconsin a laughing stock on thw national state and Wisconsin's media never told that full story. They instead published ridicoulous stories about him talking directly to god(tm), first telling him to break his 2014 campaign promise to serve the full term as governor and run and then to drop out after he lavishly spent $90,000 a day racking up more than $1 million in debt!

Yes, people should get out and vote for change, but if most of Wisconsin outside of Milwaukee Madison corridor votes based-on the content of the media they see and the social media they consume, like, and share; Walker wins in a landslide.

Even if Tony Evers ekes out a victory, and it will not be more than 10%, the statehouse will still be solid GOP because this is what the media across Wisconsin explicitly endorses and slants the news to. There will be no meaningful change here until the statewide media landscape changes.

Well said. Given all the leaks from former Walker Admin workers and even his former cheerleaders at the J-S, it certainly feels like things are crumbling for Scotty, and a third term would be an,obvious disaster.

Getting rid of this,bum and restoring competence with Evera can/should be done on Tuesday, barring funny business. And WisDems need to be calling out the possibility of funny business TODAY. Do not play nice.

You know what? I’m not listening to those voices in my head anymore. Those depressing, self-defeating demons who have been telling me “Don’t get your hopes up. All is lost. Walker will somehow find a way to win a third term, and then he will be governor for life.”

I’m not buying it anymore. From everything I have seen recently, progressives ARE fired up. Moderates ARE ready for change. Walker has a ton of money backing him, but Evers has raised more than I ever thought he could, and he’s hanging in there, punch for punch. Not only that, but he’s a genuinely likeable, small-town Wisconsin guy who relates easily with people all over the state. No money can buy that.

We’re going to do this. It’s going to happen!

Yes - this is an important report by a national major media source. Was any of the factual analysis picked up by the media typical voters will see?

Of course, beating Walker will not happen by falsely thinking republicans have had enough and most self-identified independents are just too embarrassed to admit they are republicans.

Interesting tell in today's print edition of MJS. Their "education" beat reporter admitted that part of his job is to work for Marquette Law Poll.

He revealed one way Franlin skews those polls. He asks racist questions like whether "better parenting" would solve school problems. This is a dog-whistle and Franklin knows that this framing is not legitimate if his purpose was to accurately devine voter's intentions.

He could have framed it as being about whether students start with ready-to-read and ready-for-school skills, leaving the vague "parenting" crap out of this.

But it suits MJS, remember their education reporter admitted today he works with MLP, and Frankin's right-wing dark funders purpose to structure the poll to create the lie that Walker and Evers are tied while Baldwin crushes her GOP opponent. Absolutely insane to try to sell the nonsense that more than 1-in-10 Tammy Baldwin supportes are also Walkerites.

But back to the original post: The media undecided voters, and there are few if any, see in Wisconsin has not done any report I g on Foxconn for a long time even when national news sources break important stories the weekend before the election.

Nothing but Walker talking points in MJS today and, of course, no critical analysis on Foxconn for months.

I first read about the groundwater contamination in the Central Sands area of WI on your blog. You deserve a lot of credit for following and writing stories about groundwater issues created by CAFOs. Thanks!