In this day and age it's rare to hear an elected official meld the everyday and spiritual, but that is what Bad River Band chairman Mike Wiggins, Jr did Tuesday night before a capacity crowd at the Urban Ecology Center in a presentation about land, water and culture. (Wed. a.m. update - - Audio, video now available, here.) 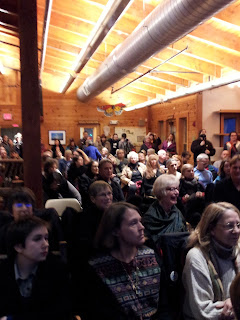 The Bad River reservation is in a complex, wild rice-growing watershed beneath the Penokee Hills at the north shore of Lake Superior, near Ashland.

An area at the headwaters of the Bad River is targeted for blasting and excavation into an open pit iron ore mine up to 22 miles long, 1,000 feet deep and a mile wide should a mining bill already approved by both houses of the GOP - controlled legislature win final approval.

The low-grade iron ore a Florida coal-mining firm wants to mine, haul and mill is beneath hundreds of feet of sulfide-bearing minerals that science shows produces sulphuric acid when exposed to air and water - - a mining byproduct that will lead to toxic, acidic mine drainage into the Bad River watershed where human beings, wildlife, fish, vegetation and clean water worked and thrived in harmony for centuries.

To make his argument, Wiggins principally relied on a single Power Point image - -  an aerial view of forests, waterways and picturesque sloughs on Bad River Band reservation land near Lake Superior's Apostle Islands that serve as natural Great Lakes water filters, and thus a benefit to all. 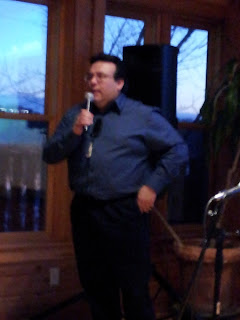 Lake Superior is the largest and deepest of the five Great Lakes that hold 95% of US fresh surface water.

Wiggins pointed to various landmarks visible at river bends and islands in the aerial view of the watershed at Lake Superior where he'd and his people have had important experiences, where there had been old ricing camps, where he'd "had the privilege of seeing bears swimming" or blue herons pop out and where modern fish hatcheries the Band operate contribute to its people's sustenance and also serve the larger Northern Wisconsin economy, too.

But the mining bill that carries the real threat of environmental and cultural devastation is being driven by big money and "practical people" driving a process and managing hearings who tell people like Wiggins:

Wiggins told the audience that he'd had a dream in 2009, before there was discussion of the unimaginable - - a mining bill to enable a massive open pit mine in the Bad River's  pristine, treaty-protected area - - in which he saw the discoloration, corrosion and ruination of the land.

He acknowledged how hard it would be to convey "the story of our home" in two minutes, let along through a dream, to legislators and mining interests pouring money into the process.

"Talking about a dream is not that easy," he said.

"It's tougher to describe...the intangibles...the power and the mystery" of the watershed and what it means to the Band.

More than "dollar signs and money," he said.

Wiggins had a solution: legislators couldn't vote on the bill until they spent three days "camping in the Penokees and on a canoe trip in the Bad River watershed."

"It's going to take courage on the part of legislators to stand up to this stuff."

The Overpass Light Brigade drove home the message with an appearance when Wiggins was finished. 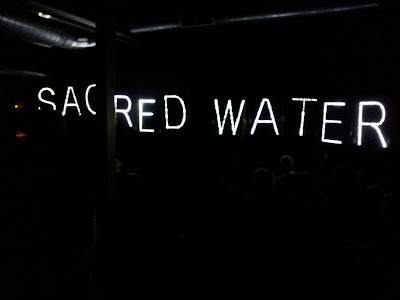 we don't need 95% of fresh water on surface if we can pay haliburton and other multinational corporate interests tied to the military-industrial complex to provide clean water -- just look at how safe and healthy our highly-processed corporate food/agriculture interests feed us fattening foods that lead to diabetes even in children!

Our "journalists" says that we have a NEW and MODERATE scott walker now and he is cooperating with criminal investigations into the criminality that underlies his ascent to power.

Why do some want to rain on this picnic? My TEE-VEE, squawk radio, and the noooooozepapers all told me that mining was safe and no environmental standards were being changed.

Mile Wiggins is awesome, and now shows himself to be the spiritual leader as well as the political leader of his people. Please, give us more. The people need to hear his story and to understand the planned genocide of the north. The Bad River Band is truly fortunate to have such an eloquent spokesman.