This is the 17th installment of a 21-part series about Walker's assault on the Wisconsin environment. The series will conclude next week before the Nov. 6th election.

This posting provides expert analysis I gathered about a year ago, and will help explain the remaining posts over the next few days.

As one state insider told me: "There is a message I would like to send to Wisconsin: Make no mistake, Wisconsin is being sold off piece by piece to rich individuals who own the party currently in the governors office."

That posting became the heart of the 11th installment of this series on October 23rd.

In late 2017, I decided to go back to some of the original sources and some additional experts to again get a feel for what was happening inside state decision-making and within the DNR, and the responses were so extensive that I ran them over two days, and then combined them into one long posting because it was easier for people to share the material is a single item.

So I want to add those items to this current series, as they provide context for, and insight into what Walker and his legislative have wrought, and the steep challenges facing a new Governor, fresh legislators and others if given the change to begin to restore both the DNR and state's damaged environment.

An immediate task: free policy from donors - - which was the focus of Part 1 of this series because it was what consumed Walker on Day One of his first term.

This is the link to the combined accounts of what the various insiders and experts had to say November 20-21, 2017.

The past year has really shown me how the GOP is afraid of and caters to their wealthy donors - some of whom aren't even that generous. It was obvious before but this year has been brutal. DNR administrators support any development project regardless of environmental impacts. They are not interested in the environment or public health. If they can't maneuver around the law by bending it, the legislature simply changes the law.

Rich Republican donors feel free to call up the DNR Secretary and Governor and demand that their projects go through. This puts pressure on legislators and DNR upper management. It has created an atmosphere of desperation at all levels of the DNR.

I have witnessed administrators simply ignoring valid environmental and legal concerns from experienced, competent employees and I have seen administrators ignoring the process for determining environmental hazards when granting permits. It is true that DNR doesn't follow their own processes and skirts the law when possible.

The Secretary's office seems to have a lot of power. And when that power is wielded by an incurious, pro-business person, bad things happen. So far, even in his short tenure, Dan Meyer has proven himself to be the same as Cathy Stepp.

The only real check on unbridled donor power is the citizen groups and nonprofits who sue. Most of these groups are focused on local problems so it is difficult for the average person to know what damage is being done to other parts of the state.

And let's face it, the Supreme Court of Wisconsin is mostly unsympathetic to the average citizen. The DOJ under Brad Schimel is complicit in twisting the law.

There is a message I would like to send to Wisconsin: Make no mistake, Wisconsin is being sold off piece by piece to rich individuals who own the party currently in the governors office.

And that party is more than willing to promote (for money) the destruction of the environment in order to stay in power. These rich donors (at least the ones I have met) aren't exceptional. They are ridiculously selfish people less worthy and no more intelligent than you. They are stealing your water, polluting your air and compromising your health and wealth. We deserve better.

Get rid of the politicians who are beholden to and serve these losers. Replace them with people who take your well-being into consideration. You matter. - - DNR staffer.

*  The DNR is behaving like a developer's "private contractor."

We challenge the DNR’s working as Kohler’s private contractor. FBRF has records showing Scott Walker’s office working with the Kohler Company to influence the annexation of State Park, Town of Wilson and Kohler lands to the City of Sheboygan so Kohler would not have to follow Wilson’s requirement of environmental impact evaluation.

The DNR has become an arm of businesses and has not taken steps to protect our park land or our natural resources. We continue to gather supporters who will stand up to this Governor, legislators and DNR management to take back control of our resources. - - Friends of the Black River Forest.

[Editor's note: the project referred to here - - a high-end, privately-owned golf course proposed by a powerful Walker donor to be built on a nature preserve and into a popular state park along Lake Michigan - - is the subject of Part 10 of this series.]

* The Legislature is attacking environmental protections in Wisconsin "at a stunning rate."

The majority in the Legislature is attacking environmental protections at a stunning rate.

Just last year, not content to pass sweeping legislation to try and limit the DNR's regulatory authority, the Legislature requested an attorney general's opinion to reinforce its edict that DNR could not impose conditions when permitting high capacity wells. Clean Wisconsin challenged nine well permits that were issued after the AG's opinion, for proposed wells that DNR's own scientists found would have significant impacts on nearby water bodies.

The DNR's attorney argued at the hearing that Wisconsin Supreme Court justices who unanimously held (in the Lake Beulah case) that the Public Trust Doctrine requires DNR to consider environmental impacts of high capacity wells "got it wrong."

The Dane County judge asked (rather incredulously) whether she was then supposed to ignore the Supreme Court? DNR's attorney said yes, and went on to state that DNR has no authority to regulate the waters of the state, only "access" to those waters. (He didn't say how DNR would manage "access" to rivers and lakes that had dried up due to over pumping of groundwater.)

Clean Wisconsin won in circuit court, but that won't be the end of it. - - Advocate 1.

* Like water, Wisconsin wildlife - - another public trust - - in "ongoing decline."

Like our Wisconsin water resources, our state’s wildlife—deer, birds, and predators alike—are held in trust for current and future generations of Wisconsin citizens. But, regrettably, the last few years has shown an ongoing decline in regulatory oversight over our wildlife, placing this invaluable resource in jeopardy and creating public safety and health risks to the public at large.
While the elimination of Wisconsin DNR’s Science Services Bureau speaks volumes in and of itself, the state’s de-prioritization of science bodes particularly poorly for wildlife management and complies with a harmful trend toward increased deregulation as highlighted below. - - Advocate 2.

It’s painful to watch Scott Walker in campaign mode, especially if you are old enough to remember that Wisconsin once led the nation in progressive environmental protection, following the lead of Increase Lapham, John Muir, Aldo Leopold, Gaylord Nelson, Lorrie Otto and dozens of others who loved our diverse, beautifully mysterious gift of nature.

In speaking and writing, they proved they were real humans of titanic character, clear of thought, who expressed their passions for this place, wearing their hearts on their sleeves, leaving an imprint of their values permanently in place for their fellow citizens to emulate.

By contrast, the campaigning Walker is his own invention of a person he is not. The rehearsed smile, the little nod 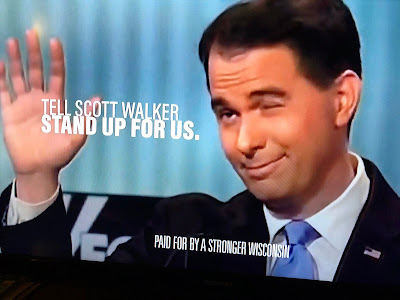 more like a plastic bobble-head doll than a natural orator, the carefully composed empty sentences that ring with phrases like “keeping your hard-earned money” even when he is scheming to pass another tax cut for his billionaire backers.

Or to ban any public discussion of global warming. Or to further shrink the scientific staff of the Wisconsin Department of Natural Resources. Or to invite gold and copper sulfide mining, which always renders large tracts of land and waterway unusably toxic. Or to try to undermine the gloriously useful Wisconsin Idea. Or to destroy primitive wetlands, prime habitat for wildlife and rare plants.

When the campaigner Walker speaks, your eyes look through the pathetic plastic invention standing before you on the stage to that group of shadowy figures behind him pulling the strings, the few billionaires from Wisconsin and the Koch brothers, the winking oligarchs who back this drama, his true masters for whom he has staged this sad, little one-act Punch and Judy show. - - Paul G. Hayes, former Science Reporter, The Milwaukee Journal.

Well-stated. It's all about (ab)using government power to transfer public goods and assets and money from the 99% of us to Scott Walker's donors.

It's nothing but a sleazy grift, but we all pay the price.

Walker is a grifter and most of Wisconsin knows it. Ths fix is in though which is why Marquette Law Poll and BFF MJS ate lying that 15% of Tammy Baldwin's supporters will vote for Scott Walker. The fix was in for Trump in 2016, we know vote systems were hacked, and nothing meaningful was changed to secure an honest election.

The only way Evers can win is if turnout is so large that it can't be hacked and flipped - this means he needs almost a 10% margin. This may be possible, but every ne3ds to get out and vote.

There are essentially ZERO Baldwin/Walker voters.