[Updated from Wednesday, 3/16/16 at 4:21 p.m.] The good news - - temporarily - - is that a disagreement between pro-industry forces in the Wisconsin  GOP-run state assembly and GOP-run state senate has prevented approval in the just-concluded legislative session of a bill sought by Big Ag, the state's industrial-scale animal feeding operations (CAFOs) and water users way better connected politically and bigger than you and me to make permits for high-volume groundwater withdrawals permanent, transferable and beyond traditional DNR review. 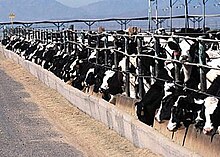 There have been more than 100 new permit applications for these high-capacity (100,000-per-gallons per day) wells in the last 36 weeks, DNR records show.

About one a day.

Is the supply of Wisconsin groundwater unlimited?

Do nearby water users have any say in its extraction, or in the related issues posed by CAFO (concentrated animal feeding operation) expansion which is using huge amounts of water statewide?

And runoff, like this recent, two-mile long spill into a trout stream.

There are now about 300 CAFOs statewide with a concentration in the sensitive Central Sands region - - (along with 3,200 high-capacity wells there, and counting_ - -  and in Kewaunee County, NE Wisconsin - - producing massive amounts of manure, and runoff risk?

Here are the latest CAFO data compiled by the DNR, and a statewide map.

So expect the two chambers to straighten it all out, as environmental matters are being run in the state with 'Walker's chamber of commerce mentality' and Big Ag and big animal feeding operators wanted the bill a while ago regardless of social costs and known risks.

Sneak attack alert: A legislative request for an Attorney General's opinion on the issue could further and faster tilt the issue to a pro-business and even wider conclusion by ultimately weakening the people's rights to clean and accessible water guaranteed in the State Constitution.

Any college political science sophomore interning in a political office knows that elected officials do not ask their in-house counsel for a so-called advisory opinion unless they know what the outcome will be, and how they can employ that 'advice' with allies and through media.

If you have one-party rule, and control all three branches of government, things like constitutional water protections and traditional DNR reviews in the public interest float away.

It will be the first order of business next year and will be rushed through to passage as soon the Assembly and Senate open the doors. Big money Ag wants this bill and big money gets whatever it wants in Walker's world. I wouldn't be shocked to see some kind of emergency order come from Walker's office late on a Friday afternoon authorizing the bill on a temporary basis to please the "big" money so that funds flow to campaigns this summer. Nothing is beyond the corrupt hands of Scott Walker.