We know the details:

* Projects delayed and even cancelled because of bloated SE 'free'way expansion pushed by the unelected SE Regional Planning Commission and Scott Walker when he was Milwaukee County Executive.

* The resulting potholed mess which motorists must navigate on their errands, and to tire repair shops. 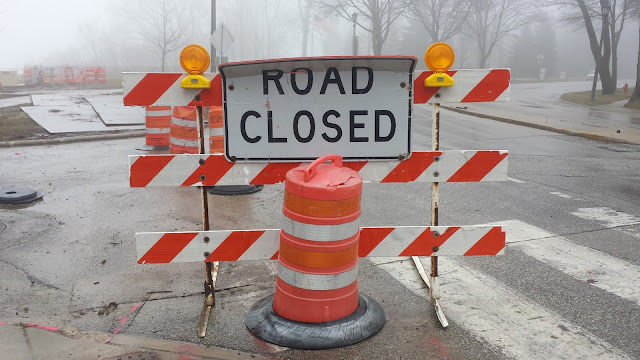 Yet state GOP politicians in full state control for the last eight years will not do their jobs and craft a reliable funding solution to address all the state's transportation dysfunctions - - and don't hold your breath even as the small-government, tax-cutting hypocrites like Republican leaders Walker and Assembly Speaker Vos are all talk about raising the gas tax.

While the reflexively anti-Vos, game-play extraordinaire and State GOP Senate Majority Leader Scott Fitzgerald has warmed up to an even more far-off 'solution' - - road tolls.

Like I said, they are all do-nothings - - and inveterate campaigners interested foremost in in scooping up road-builder campaign donations, winning the next election, holding partisan power - - with no coherent plans that might fix the roads and keep the buses running.

Three things for the record:

1. The state gas tax used to go up automatically every April about a half-cent - - camouflaged by the bureaucratic term "indexing" - - until the political price for having set in motion a weaselly tax increase without accountability got too high.

2. So the pols ended indexing, replaced by the state credit card, long-term debt, more potholes and finally project delays and cancellations when the money basically ran out.

...a multibillion-dollar freeway expansion plan is under study for southeast Wisconsin by WisDOT, and gas taxes will have to skyrocket to pay for it.

Hotly debated in Milwaukee and its surrounding counties, the plan has not


received much publicity out-state even though motorists across Wisconsin will dig deeply to pay for it.

The plan calls for an estimated $6.25 billion to be poured into new [or resurfaced] lanes in the next 20 to 30 years. That's a very big figure -- big enough to build 16 Miller Park stadiums at $400 million each, for instance.


The plan will do two things: Rebuild the complex Marquette Interchange in downtown Milwaukee and add about 120 miles of new freeway lanes next to existing lanes on major roads, like I-94 and I-43 in Milwaukee, Kenosha, Racine, Waukesha, Walworth, Washington and Ozaukee counties. Among the expenses: acquiring more than 600 acres, tearing down 201 homes and 28 businesses, and compensating the owners.


The plan was approved by an unelected body, the seven-county Southeastern Regional Planning Commission, and is now under review by WisDOT.

About $750 million of the total cost -- or about 12 percent -- has been set aside for the reconstruction of the Marquette Interchange, from 2004 to 2008. That leaves about $5.5 billion not funded, or roughly $200 million annually for about 25 years to complete the rest of the plan. And like all big-ticket estimates, the bottom line is going to rise...

A penny added to the already-steep gas tax raises about $30 million, so if $200 million in fresh highway dollars are needed, the southeast Wisconsin
freeway expansion will require a fresh six or seven cents -- at least 20 percent to the per-gallon gas tax - - if WisDOT moves the plan forward.

It is possible these gas tax increases could be minimized by substituting an increase in vehicle registration fees -- but motorists wouldn't like that, either. Channeling a disproportionate share of state and federal transportation funding to freeway expansion could offset some increases in the gas tax.

But that would threaten other highway projects, trim state aid to mass transit, and cut local road repair budgets throughout the state. That would be really unpopular in Madison or Ashland, Green Bay or Wausau...
Republican legislative leaders -- including many who champion tax freezes and less government spending -- have long supported raising the gas tax. Along with the road builders, Republicans are leading the fight for freeway expansion.
-----------------------------
Obviously, gas taxes did not skyrocket to pay for the SE 'free'way plan - - or to cover any transportation cost - - because legislators ended indexing in 2005, but kept right borrowing for their unchecked transportation spending instead.

Now with legislators cutting that back, too, the results are the predictable: policy inertia, planning paralysis, plus potholes, project cancellations and delays.