Hurricane Matthew flooded North Carolina's industrial-scale animal feeding operations, and now torrents of dead animals and toxic manure are washing across the state, down rivers, into the water table and eventually to the sea:


Hundreds of hog and poultry farms may have been inundated last week as the Neuse, Lumber and Tar rivers roared over their banks, a rampage powered by the deluge of Hurricane Matthew.

The carcasses of several thousand drowned hogs and several million drowned chickens and turkeys were left behind.

An incalculable amount of animal waste was carried toward the ocean. Along the way, it could be contaminating the groundwater for the many people who rely on wells in this part of the state, as well as threatening the delicate ecosystems of tidal estuaries and bays.

Is Wisconsin, with a warming climate marked by more severe rain events, an exploding number of large-scale animal feeding operations (CAFOs): here is the data from the DNR - -

- - and a state government intentionally easing back on environmental protection and enforcement paying attention to or learning anything from North Carolina's plight?

It was just a few months ago that heavy rains flooded the very area in Northwestern Wisconsin where Iowa hog breeders want to build a 26,000 hog feeding operation, and this is what the region looked like when the rain stopped: 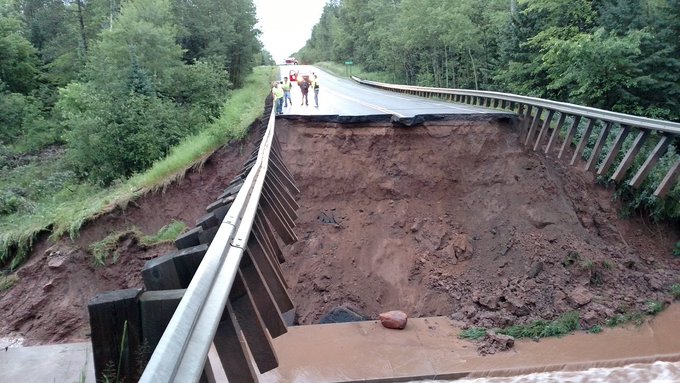 - - underscore the madness of proposing to Scott Walker's "chamber-of-commerce-mentality" Department of Natural Resources the approval for a 26,000-hog feeding and manure storage operation within smelling and polluting distance of Lake Superior, Chequamegon Bay and numerous wells providing drinking water and economic life to the entire Northwoods region:

The Department of Health Services issued a warning on Friday to residents and cleanup crews in the affected area to use extreme caution while assessing damage or removing debris, because of the many health risks.

Flood waters can contain raw sewage, fertilizer, gasoline, pesticides and other harmful substances, so people should not swim, bathe or wade in lakes, streams or any other waters affected by the flooding...

Water wells could also be contaminated, so well owners with flooding near the well should assume the well is contaminated and not use water from it until the floodwaters recede and the well had been disinfected and tested.

How many warnings do we need?

How much faith can we put into Scott Walker's DNR to do the logical, reasonable right thing?

The evidence to date suggests nothing.

Feedlot flooding causes pollution in North Carolina after a hurricane?

Certainly not anyone living in the affected areas of North Carolina?


In the aftermath of Hurricane Floyd, loose regulations that helped eastern North Carolina become the nation's biggest producer of turkeys and the second biggest of hogs have come back to haunt the state's public health and its environment.

Officials say that the September storm that hit the region harder than anywhere else, killing 48 people and leaving behind more than $1 billion in largely inescapable damage, also left a vast amount of damage that might have been averted: incalculable and continuing hazards in ground water, wells and rivers from animal waste, mostly from giant hog farms.

Within days after Hurricane Floyd, North Carolina officials feared the worst for its coastal and estuarine ecosystems. Floodwaters flushed the contents of fuel tanks, pig waste lagoons, and human sewage treatment plants into the state’s rivers and sounds and, ultimately, out into the Atlantic Ocean. The carcasses of pigs, chickens, and other dead animals floated in the soup of pesticides, fertilizer, and topsoil carried in the massive runoff.

In 1999. Hurricane Floyd washed 120,000.000 gallons of unsheltered hog waste into the Tar, Neuse, Roanoke, Pamlico, New and Cape Fear rivers. Many of the pig-shit lagoons of eastern North Carolina were several feet underwater. Satellite photographs show a dark brown tide closing over the region's waterways, converging on the Albemarle-Pamlico Sound and feeding itself out to sea in a long, well-defined channel. Very little freshwater marine life remained behind. Tens of thousands of drowned pigs were strewn across the land. Beaches located miles from Smithfield lagoons were slathered in feces. A picture taken at the time shows a shark eating a dead pig three miles off the North Carolina coast.

Is Wisconsin … and a state government intentionally easing back on environmental protection and enforcement paying attention to or learning anything from North Carolina's plight?

NO, they are not. They don't pay attention to anything but just plow ahead with whatever they want to do. Everyone should know by now that Republicans NEVER think things through to the end result no matter what. They simply get and idea and push it forward with no further thought. Then they blame somebody else when things go wrong. It's their MO.

Looking at the road-building work, so easily washed away? Also a little dam up there washed out...so, what about that dangerous Enbridge Line 5 pipeline carrying toxic oil and chemicals through the flooded Bad River reservation land? How big are threats to the Earth's water from the segment of Line 5 that runs underwater in Lake Michigan? Watch this 10 minute video:
http://player.mashpedia.com/player.php?ref=mashpedia&q=BJdMseSuo1M

to get an idea of the amount of water threatened by that unnecessary oil transport pipeline in the Great Lakes under the Mackinac bridge. (That underwater segment of pipeline is old and maybe it's anchored but it's still constantly being shoved back and forth by the fierce currents of the Straits.)

And North Carolina, with its tobacco-heirs-funded big research university...couldn't the academics and scientists see what would happen when Hurricane Matthew threatened all those pig CAFO's (sited, BTW, in black neighborhoods)?

Racist...the toxic water destroyed people's homes already devalued because of CAFO's all around, now contaminated drinking water...it was inevitable.
North Carolina is the 2nd biggest pork producer in US next to Iowa and it's now destroyed, so...onto Wisconsin? Let's get the Army Corps of Engineers to do some serious clean-up in America instead of allowing unnecessary pipelines on sovereign indigenous land in WI, ND, MN, Canadian First Nations. We cannot drink the oil,
and now we cannot even drink the water anymore? We all must be Water Protectors.