A few weeks ago, I wrote about a pollution settlement 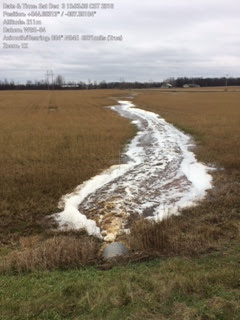 that major dairy interests were celebrating as a win over the DNR:


The DNR has settled a power play lawsuit on terms favorable to the special interest that brought it - - Big Dairy - - which means there will be more muck flowing from big CAFOs already running amok.

The dairy interests claimed that the DNR was over-regulating them even though state auditors had found multiple problems with DNR enforcement actions, and the term "nitrate nightmare" has shown up in recent new reporting in La Crosse.

In case you don't think the settlement was on Big Dairy's terms, read no further than the headline on the industry's reaction:

MILWAUKEE, WI – In a lawsuit filed today, citizen groups challenged the recent settlement of the Dairy Business Association v. Department of Natural Resources lawsuit. That settlement limits the state agency’s ability to protect public health and clean water without the ability or opportunity for the public to intervene and defend the public interest.

Midwest Environmental Advocates represented the Clean Water Action Council, Milwaukee Riverkeeper and the Wisconsin Wildlife Federation as proposed intervenors in the DBA v. DNR lawsuit. Friends of Central Sands also sought to intervene and are now clients in this challenge. However, DBA and DNR settled the lawsuit before the intervenors had a chance to become involved in the case.

To challenge the settlement, the groups filed a petition for judicial review and declaratory judgement action in Milwaukee County Circuit Court.

Groups moved to intervene in the DBA v. DNR lawsuit because the suit challenged the authority of the DNR to require our state’s industrial-scale livestock operations to apply for and obtain water pollution permits. While that threat wasn’t ultimately a part of the settlement, groups remain concerned with how the settlement takes away the DNR’s authority to use science-based decision making in regulating contaminated runoff that comes from calf hutch areas and feed storage runoff.

“It’s been the EPA’s position that the practices at the heart of this debate, including vegetated treatment areas and calf hutches, do produce contaminated runoff,” said Sarah Geers. “Most states have embraced better pollution controls, but this settlement makes it more difficult for the DNR to apply sound science to EPA-documented, known sources of pollution in our ground and surface waters. It’s another step in Wisconsin’s race to the bottom of stripping our state government’s ability to protect our water.”

“The level of influence of special interests over the basic functioning of DNR is threatening public health and our natural resources,” said George Meyer, Executive Director of the Wisconsin Wildlife Federation and former DNR Secretary. “I’ve seen a lot over the years, but this situation is extreme in circumventing the agency’s clear authority to protect our public waters.”

Public scrutiny and citizen action is an essential tool in Wisconsin to hold industrial livestock operations and the government accountable for regulating and preventing water pollution and public health threats.

Citizens have shouldered the burden of taking the state to court over failures to limit ground and surface water pollution in challenges to facilities such as Richfield Dairy and Kinnard Farms. Citizens forced action by the U.S. Environmental Protection Agency through filing a Safe Drinking Water Act petition. And a 2016 review by the Legislative Audit Bureau showed that CAFO pollution permit monitoring and enforcement was severely lagging.