WH says WI's COVID rates are bad. Now why is that?

This has to be the craziest development since Wisconsin's GOP leaders recessed the Legislature nearly seven months ago without revealing their promised (wink-wink) COVID-19 prevention plan while demeaning, obstructing and trashing the Governor's masking orders and related measures.

Yet despite these known facts, Donald Trump's task force with little credibility of its own wants Wisconsin to do something to slow the pandemic which Trump's loyal lieutenants here have enabled statewide as a matter of persistent and partisan policy.

White House officials are warning Wisconsin's leaders that more people will die unnecessarily if the state doesn't adopt a "more comprehensive" plan to combat the "unrelenting" rise in cases of coronavirus.

* Did you see your President crowding mask-free Wisconsinites shoulder-to-shoulder here at rally after rally all fall. Yeah, somebody should do something to control all that reckless, feckless dangerous stupidity. 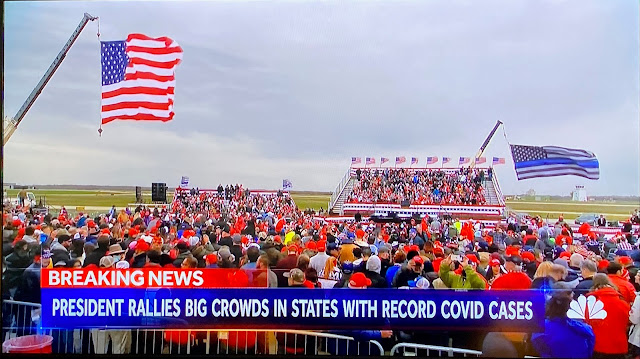 * The White House Task Force putative chair is Mike Pence, Scott Walker's pal. Pence could call up his veteran debate coach and get the lay of the sickened land here in 30 seconds.

*Does the task force know or care how many different ways Republicans, their lawyers and special interest allies have hamstrung the Governor's pandemic prevention programs while treating the virus like a sniffle.

* Does the White House know that senior GOP State Senator and then-budget committee co-chair Alberta Darling recently said she and her fellow Republican legislators had done plenty to fight the virus and there was nothing more they could offer?

* Does the White House know that the GOP Assembly Speaker called the Governor's masking policy "lawless," and other GOP officials went even more negative?

Republicans in the state legislature are condemning Gov. Tony Evers' extension of the statewide mandatory mask order, calling it everything from “ineffective” and “unnecessary” to “mind-boggling” and “dictatorial.”

Republican Senate Leader Fitzgerald pushed back on the mandate, saying it is “not valid and is not worth the paper it’s printed on.”

*Does the White House know that GOP Senior Senator Ron Johnson went to and spoke at a fundraising event a few weeks ago while awaiting the results of a COVID-19 test that registered positive a few hours later? Does that sound like someone who takes the matter seriously, sets the right example, wants to be a problem-solving leader in the fight?

* Does the White House know that GOP legislative leaders got a friendly State Supreme Court majority to throw out the Governor's 'Safer-at-Home' order which helped keep a lid on the airborne menace.

* And that GOP State Senator Van Wanggaard, (R-Racine), said on the record he opposed a state masking order even if COVID-19 cases here were to increase ten-fold?

As I wrote in late October:

It's worth noting that in the 22 days since Van Wanggaard thumbed his nose at mass illness, Wisconsin's positive cases exploded to 214,996 from 141,830 - an increase of just over 50%, according to the state's COVID dashboard.

In other words, the Wisconsin case load has nearly doubled in less than six weeks. The hospitalization rate has skyrocketed. People are dying here from COVID-19 by the dozens every day.

Of course we need a better plan, but does the White House know why we don't have one?

I read the White House communication to Wisconsin as both scientifically serious, yet totally tone deaf.

Serious because the message is fact-based: Bucky: you're about to be the SuperSpreaderState, and the others won't like your new and deadly Wisconsin variety of 'Midwestern Nice' [Sic].

But tone deaf - maybe insincere or just dumb are better descriptors - because the political people Trump and Pence have loaded on to the task force obviously know what's happening, and could pick up a phone anytime and tell the Republican COVID coddlers here to get off their vacationing, game-playing backsides and stop the killing.

"COVID coddlers", a phrase worth repeating.