We're not counting votes anymore in Wisconsin - well, there is one Trump servant named Vos with some last-ditch-taxpayer-paid-monkey-wrenching up his sleeve, and more about him in a few grafs.

So let's return to life-and-death COVID counting courtesy of the NY Times, below, which carries data and realities which Republican officials 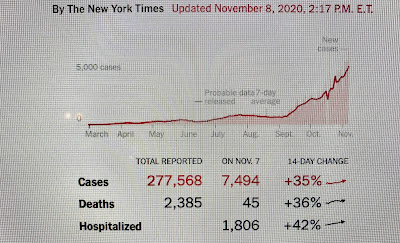 and their allies are ignoring - though they enabled the grim and worsening totals which now burden everyone else.

In other words, there is a savage and uncontrolled  contagion in Wisconsin, and even the Trump-diminished/Pence-led White House Coronavirus Task Force said weeks ago when the daily new case tally was one-third of Saturday's that somebody here needs to turn this around, and quickly.

And while we know that is not happening because GOP Legislative leaders and their legal, judicial and special interest allies continue to block the Governor's efforts without offering any ideas or plans of their own.

Which is why I want to take a closer look at the handiwork of some of these Covid coddlers.

* You can't overlook the role played by GOP-friendly and right-wing State Supreme Court Justice Patience Roggensack. She wrote the 4-3 majority opinion on May 13 which ended an extension of the Governor's medically-appropriate and common sense 'Safer-at-Home' order which had kept a lid on the easily-transmittable airborne virus.

Using the NY Times chart, you can see that there were 290 new COVID-19 cases reported on May 13 the day of Roggensack's ruling.

You may also remember that when the Court heard arguments on the case during a Zoom session which protected them from the virus, Roggensack opined that a widely-reported outbreak at the time in Green Bay was not troubling because she didn't think it was hitting "regular folks."

She and others in this deadly drama here have made trouble for themselves with their revelatory language, as I will point out below.

And from a technical point of view - and, yes, it's been years since my investigative reporting days when I regularly read records at the Milwaukee County Medical Examiner's Office - I don't recall seeing a "Regular Folks" box on official death certificates.

* Choice words of choice about the pandemic also showed us a thing or two about WI GOP Assembly Leader and key COVID coddler Robin Vos.

You may remember during his infamous appearance on April 7th in head-to-toe personal protective equipment that he said it was "incredibly safe to go outside."

He got mocked and skewered for the ridiculous contradiction, but like Roggensack, note that that it was his reliance on a modifier to sell his position that made his self-inflicted wound deeper. He might have gotten away with 'I think it's safe but I want to make sure,' but saying it was "incredibly safe" was right out of 'How Not to Sell a Big Lie," Volume I.

By the way, if it's so 'incredibly safe' to go outside, why does the NY Times chart show that when Vos piped up in his hazmat suit on April 7th there were a reported 138 new cases of COVID-19, and as I've noted, the most recent toll on Saturday in Wisconsin was 7,494.

I guess in VOS's scientifically-upside-down world, it's gotten 54 times safer out there.

* And let's not forget GOP State Senator and big thinker Van Wanggaard, (Racine). He's the one who said on October 8th that COVID-19 cases could increase by a factor of ten and he would still fight any statewide masking order.

The NY Times chart showed 3,237 new cases on October 8th - which is a big number on what should be called Van Wanggaard Covidometer Day - but, alas is less than half of Saturday's 7,494.

Nonetheless, the trends are all in Van Wangaard's favor, so we might just get there yet.

In fact, look backwards, the chart shows that Wisconsin had reported 338 new cases on June 23rd, so we'd have already managed the Van Wanggaardian ten-fold new-case increase on a daily basis a mere 14 weeks before he threw down his 10X marker.

I sure hope so, but if Vos, Van Wanggard & other GOP leaders like State Senator and recess-enjoying Alberta ('we don't need to come in') Darling don't get back to work for the people and public health - with a purpose -  we might soon be looking back at Saturday's 7,494 tally as the pandemic's previous welcome pause.