Waukesha Co. climbs to #4 in COVID cases per capita

Waukesha County's COVID19 case rate per 100,000 people puts it in 4th place among all Wisconsin counties, according to the current Monday listing published daily by The New York Times: 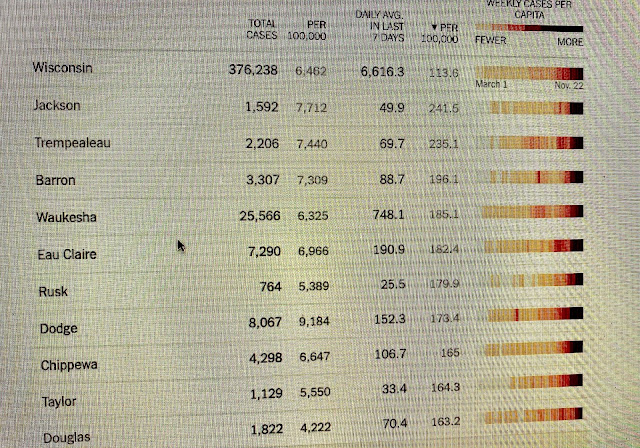 Most of the other counties on the list are smaller, so presumably with fewer public health resources, which makes Waukesha County's position on the list pretty troubling.

...the county's messaging on mitigation efforts has been mixed. In a July statement, Farrow, who himself fought off the effects of the disease recently, criticized Evers' mask mandate, stating that "mask-wearing goes too far."

Also in July, Sheriff Eric Severson said his office would not investigate or respond to reports of mask mandate violations. No new enforcement measures were announced this week.

At some point it may be learned if Trump's October 22nd rally is a contributor to the virus's spread:

Separate reporting on October 29th suggested those kinds of linkages:

A CNN investigation of 17 Trump campaign rallies finds that 14 of the host counties -- 82% of them -- had an increased rate of new Covid-19 cases one month after the rally.

I have no idea how it is such a burden for them to wear a mask in the stores or for the stores to enforce the rule. The sign for masks is usually right close to the one that says "No shoes, no shirt, no service" and those restrictions are for health reasons and the stores seem to have no problem enforcing that and people comply fine with those restrictions but supposedly the mask is like the weight of the world on their shoulders.