WI GOP pols will not lead during COVID, so Evers asks citizens to step up

As the coronavirus pandemic sickens and kills without control across Wisconsin, Governor Evers used his moral authority Tuesday night in a statewide address to appeal for greater citizen action in the face of the virus - 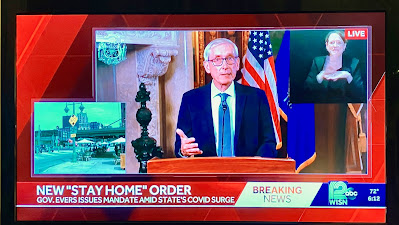 - after his legal authority was intentionally-and-repeatedly stripped away by partisan opponents who had already sacrificed their moral authority in favor of fatally-flawed - times 2,421 - ideological and partisan purposes.

The basic difference is that Evers cares that illness, hospitalizations and deaths from the virus are surging across Wisconsin, and wants to stop the suffering. To save lives and the economy.

Republican politicians and allied enablers simply do not care, having accelerated the epidemic through lawsuits, destructive ignorance and intentional inaction -

for the shallowest of self-serving reasons.

I expect some GOP legislators during their 7th month of Republican-controlled recess might shake themselves awake long enough in the next few hours to dismiss, even mock, Evers' statewide address, because their job since the lame-duck power grab of late 2018 is to keep Evers boxed in until they can get behind Rebecca Kleefisch's 2022 run for Governor.

Or Ron Johnson's. Or Robin Vos's.

The name is less important than is their regaining the office Walker could not hold, but which Republicans believe is part of their political birthright and which their donors expect as a routinely-declared dividend.