In both cases, people voted for competency over failure - Foxconn says it all - science over ideology, empathy over bigotry, and inclusive diversity over encrusted homogeneity - here and here.

More simply put: the message in Wisconsin in 2018 was, 'stop the incompetence.' In 2020, Wisconsin joined the national 'stop the chaos' chorus.

In both cases it was 'We Won't Pay For Anymore Failing.'

Trump's damage is certainly more indelible than Walker's. Both will take years to repair. Some will be permanent, but now we have a fighting chance for cleaner air, broader health care coverages, justice in the streets and in the system.

Remember, for example, that Walker never pardoned a single deserving rehabilitated former inmate; Evers has done it dozens of times.

And the scorched-earth-lame-duck-dirty tricks the White House will unleash are sure to make the Vos-Fitzgerald-Walker 2018 power-grabs look minor by comparison.

Don't get me wrong. I'm not saying we're out of the woods by any means.

But let's focus on the opportunities we didn't have last week - 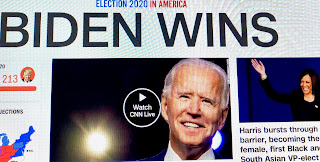 - or for most of the last decade in Wisconsin, and props to voters here for twice in four years saying "No" to undemocratic, bigoted poisonously-partisan right-wing governance.

US President Tweets The latest news on Joe Biden, Congress, campaigns, elections, policy and everything politics from us-president-tweets.blogspot.com…

Let's not forget, though, the 11th-hour neutering of gubernatorial powers that was Walker's parting "gift," and is the reason that Vos and Fitzgerald are effectively running the state without the consent of the people.

With the soulless Mitch McConnell likely to retain his seat as Senate majority leader, and having noted Trump's admiration for the way Walker pillaged Wisconsin for his corporate overlords, expect to see similar efforts for a Trump shadow administration once Biden is in the White House.