WI COVID cases will surpass 400,000 by the weekend 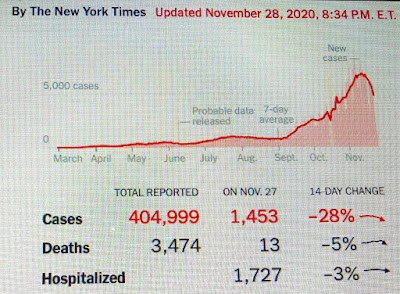 There are faces, names, families, and communities - real pain and suffering - behind every number.

This is a catastrophe enabled by a United States President, a Wisconsin Supreme Court and a GOP-leg state Legislature that has not met since mid-April.

This is what happens when public servants fail the public.

And at current rates, the COVID19 positive case total this weekend will exceed the capacity of five Lambeau Fields at 81,000+ each, or more than 15 times the 26,000+ residents of Stevens Point.

And those numbers could easily worsen, for three reasons:

1. Thanksgiving, Christmas and New Year's gatherings in the next five weeks will inevitably lead to virus transmission.

3. Cold weather and flu season will create conditions in which COVID19 will thrive.

Meanwhile, 'there's reason to hope that the WI GOP-led legislature will reconvene after an eight-month+ vacation and pass its promised comprehensive package of COVID19-responsive public health and financial assistance measures,' said no one in Wisconsin.