Apologies are in order for my failure to to check WI GOP Senate Majority Leader Scott Fitzgerald's official, taxpayer-provided Twitter feed for the latest on his action plan to confront Wisconsin's exploding COVID contagion.

You remember the plan - the one they said they'd produce with the Governor whose partnership on behalf of the public they established by hamstringing him in court with more diminution and power grabs - don't you?

Wisconsin Assembly Speaker Robin Vos and Senate Majority Leader Scott Fitzgerald said the lawsuit is to stop overreach and give the legislature a seat at the table for deciding the state’s next steps.

So I want to correct my oversight, since the State Senate is the Legislature's 'upper chamber,' and there are only 33 State Senators seated there (when they're not in month seven of a recess that has overlapped the unchecked growth of the pandemic) compared to the 99-member State Assembly.

After all, Fitzgerald has the very important word "Leader" in his title. so I should pay as much attention to his bi-partisan wisdom and big-picture policy pronouncements as I give to his Assembly counterpart, GOP Speaker Robin Vos.

And when I looked today, sure enough, I'd missed Fitzgerald's latest COVID Tweeted pronouncement - on Oct. 27th - a timely (?) sixteen days ago while COVID-related events are moving fatally and far, far faster:

Just to reassure everyone, I have never displayed symptoms of COVID-19, have never tested positive, and was not in quarantine in recent weeks. I feel great and continue to work hard for my constituents every day!

Of course, the 7,487 Wisconsinites whose positive COVID tests were just reported in the latest New York Times daily tracking charts - a number 40% greater than the 5,331 who, unlike Fitzgerald, were reported positive on Oct. 27 - probably do not "feel great.'

This is just a guess on my part. I haven't interviewed any of these people. Also - a lot of them are dead.

So is my assumption that the friends and families of the 738 Wisconsinites whose COVID deaths were reported by The New York Times from October 27 to November 11 - roughly 30% of all 2,563 Wisconsin's COVID-related fatalities since the pandemic struck in March - aren't feeling great either.

We've all learned a lot about the virus and its spread in Wisconsin which The New York Times reported grimly this way today:

The state that has unraveled the fastest.

At the beginning of September, Wisconsin was averaging about 700 cases a day. By this week, it was averaging more than 6,000. Hospitals are packed and more than 300 deaths were reported in the state over the last week, a record. Last week, Wisconsin’s chief health officer quit, noting the enormous pressure on public health officials during the pandemic.

“It took us seven and a half months to get to 100,000 cases,” Gov. Tony Evers said at a news conference on Tuesday evening, after issuing an executive order advising residents to stay home. “But it only took 36 days to add another 100,000. The way things are going, it will take us only 20 days to reach another 100,000.”

Another thing we learned is that there never was going to be a GOP COVID-control program hammered out at the table with Democratic Gov. Evers.

Because the truth is that the bigger GOP plan announced and implemented quickly during the late 2018 lame-duck Legislative session and the defeated Gov. Walker was to grab power and prestige from Gov. Evers and never give him an achievement, or an iota of respect.

And about those GOP/COVID "next steps here?"

Vos's emerged from his slumber on the public's dime to throw a post-election-ballot-counting investigative bone to the defeated Pres. Trump based on evidence-free Republican conspiracy theories spun together by unicorns and Area 51 alien survivors.

And Fitzgerald's next steps will take him to Congress and a seat there as safely-gerrymandered as was the State Senate seat he helped create and is giving up.

For a bumped-up salary of $174,000 that will be just as wasted as COVID-fighting opportunities he happily squandered while campaigning - mask-free, as his campaign Twitter feed had shown - while drawing his full $52,299 state legislative annual salary. Plus benefits.

No wonder his most recent Tweet carried his "feels great" message.

Great to speak with voters of #WI05 this morning at the West Bend farmers market! 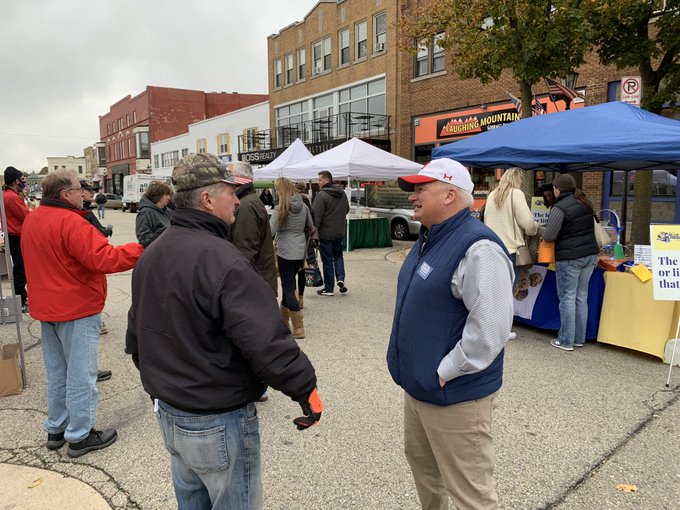