If a pedestrian were killed by a speeding car at an unmarked intersection, the neighborhood would demand an action plan from elected officials to make sure the tragedy was never repeated.

So if child on a bicycle were killed by another reckless motorist at the same intersection a few weeks later, the municipality would quickly act and install four-way stop signs.

And should a mom and her baby be run over and killed at the same spot a few days or weeks later, local leaders would overnight get traffic signals up and running there and have them controlled by traffic cops for the morning rush hour to stop the carnage - and avoid being run out of office.

Yet somehow, the GOP-run Wisconsin Legislature has managed to escape those kinds of base-level, do-something expectations and accountability during an historically-horrible calamity.

"We do not have specific drafted proposals because our intention was to sit down with the governor and actually talk about our ideas,” [WI GOP Assembly Speaker Robin] Vos said.

- in the face of unprecedented suffering statewide from which countless citizens, families, businesses - and the public's confidence in government - may never recover.

And the more I think about that last casualty - the public's loss of confidence in government - the more I think that is precisely what the GOP Legislative leadership set out to accomplish.

Because if you have been preaching for decades that government is the problem - and even the enemy -  then you can 'prove' your case by making sure that government - especially when you can make sure a first-term Democrat in the Governor's office does not get the chance to do what only the government can bring to the battle the requisite energy and resources and coordination to get the job done.

Imagine if Gov. Evers' 'Safer-at-Home' order and the rest of his pandemic-controlling agenda had been allowed to continue tamping down the virus, and, along with it, Republican propaganda and monkey-wrenching that has relentlessly disrespected Evers, demonized public employees and degraded the value of government.

You can track the impact of the Wisconsin Legislature's more than seven-month-long failure to convene and act - other than its litigating and general undermining during the pandemic's still-escalating rampage -  using these dates, data points and official COVID19 reports:

Cumulative number of COVID19 cases reported by that date in Wisconsin, 3,555; number of cumulative COVID19 deaths, 170. The data are from the State health department COVID19 website.

So COVID19 deaths during the GOP-run Legislature's do-nothing-but-litigate-and-obstruct recess have increased 15-to-16 times and the positive case total has increased about 90 times.

Yet by Tuesday, Vos only hoped to talk about ideas with Gov. Evers.

And how many hours or days will it take to set that chat up while people in Wisconsin are now testing positive at the rate of 295 an hour (7,090 divided by 24)?

WIDeptHealthServices
@DHSWI
· 10h
Your #COVIDWI_19 update shows a record number reported since yesterday of hospitalizations at 318 and deaths at 92. The 7-day average of new deaths reported has increased 880% in two months. Dig into the #data and please, help #StopTheSpread: http://dhs.wisconsin.gov/covid-19/deaths.htm… 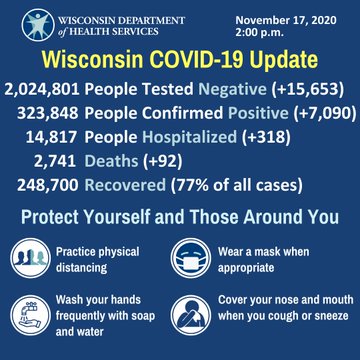 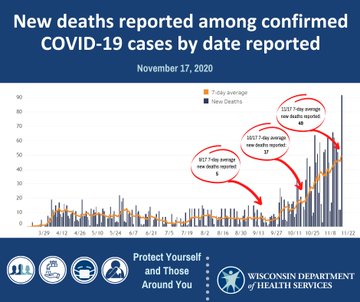 I opened my Wednesday edition of the Milwaukee Journal Sentinel this morning and was greeted by this Page 1, above-the-fold editorial: “GOP leaders just watch as state is overrun by coronavirus.” BOOM! It continues inside and includes the phone numbers of Robin Vos and Scott Fitzgerald. While I’m not ready to say the newspaper has returned to the grand days of the progressive Milwaukee Journal, it’s been increasingly obvious to me since subscribing earlier this year that they really tell it like it is.

Agreed. A strong statement. Good to see. I won't move those legislators, but may help focus editorial opinion and reporting elsewhere.

Another aspect of this GOP strategy you propose and I accept: So after months of stalling and bad-mouthing of the governor and Democrats in general for bothering to do something about the "hoax" virus, Vos et. al. suddenly evince concern and talk about talking with the governor. They've had months to think this through, and they have the examples in writing of what Evers proposes. But they need to talk. So Evers agrees. The eventual result of this talk likely will be that VosCo (i.e., the Assembly GOP) announces that Evers has bad ideas and that they, the GOP, will need to go back and think of something better, but it will take at least three years, the remainder of Evers' term, because it's all his fault they can't come to an accord. Everything gets put on the loyal opposition, even when the GOP blocks Democrats from achieving much of anything and when it's patently clear the GOP is not being serious about doing something on its own.