Another Trump Quid Pro Quo. RoJo is with him. Again.

Just when we all were agreeing to stop talking Latin, I spot another Quid Pro Quo.

Trump is trading a wimp out on public health in exchange for vaping votes, and private industry support.


Trump backs off flavored vape ban he once touted

As he had done so many times before, Trump reversed course — this time on a plan to address a major public health problem because of worries that apoplectic vape shop owners and their customers might hurt his reelection prospects, said White House and campaign officials. He also believed job losses tied to the ban would cost him as he sought to trumpet economic growth. It was the latest example of the chaotic way policy is made — and sometimes unmade — in a White House where the ultimate decider often switches gears after making a controversial vow, whether on combating gun violence, pulling troops from Syria or promising to deliver an Obamacare replacement plan. 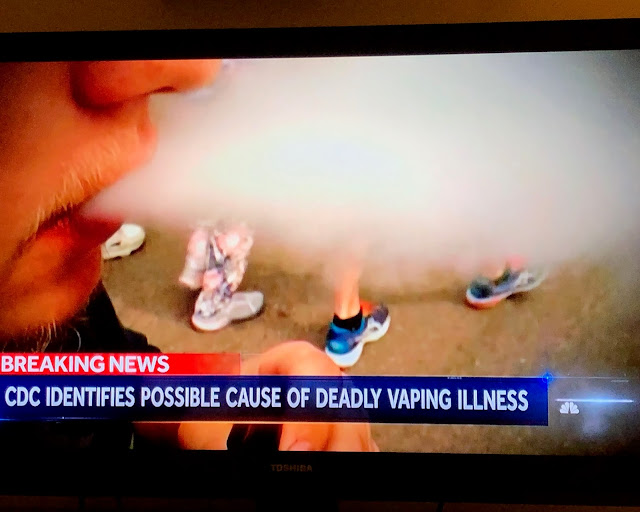 And look whose lead he was following.


Ron Johnson sends letter to Donald Trump urging him to abandon rules for vaping flavors, warns changes are being 'rammed through'

Noted on this blog a few days ago.

Yeah, that's our Ron. Not this one.

I smell at least an ambassadorship for Johnson, especially if Trump is re-elected so Walker can run for Johnson's seat.

Better yet, because Trump never really wanted Pence as a running mate, Corporate Ron can be the new Mike Pence from swing state Wisconsin.

Ron Johnson: the dope who believes, and said so with a straight face, that sunspots cause global warming...

Ron Johnson: the enabler who counseled one of his aides who was sexually assaulted to refrain from pressing charges, because the perp was Bill Kramer, a Republican State Representative. Kramer, who "learned" from this incident that he was above the law, went on to assault several other women. And why did Johnson offer such sage advice? He didn't want the adverse publicity to hurt the Republican Party. (WTF!?!?)

Ron Johnson, the airhead who, when asked what the government could do about homeless veterans, answered, “I don't believe this election is really about details. It really isn’t.”

Ron Johnson, the sexual abuse apologist and minimizer who, when asked to comment about the historic Democratic win in the U.S. Senate race in Alabama (Republican Roy Moore a married man whose hobby was preying on adolescent girls in shopping malls, was defeated.), said, again with a straight face, “Alabamians didn’t want somebody who dated 14-year-old girls.” a wink-wink acknowledgement that preying upon minors could be equated with "dating," and not pedophilia.