Your Milwaukee Business Community At Work - - Or Not

Metropolitan Milwaukee Association of Commerce President Tim Sheehy (in the photo below, l) was there for the holy picture pose with Gov. Jim Doyle and others when Talgo and its job-creating train assembly plant were welcomed to Milwaukee, but neither he or the regional business collaborative M7 would lift a finger when Gov.- Elect Scott Walker killed the federally-funded Milwaukee-Madison train line which Talgo would have supplied with cars.

The MMAC had sent Walker $381,500 for his campaign, so perhaps his witty abandonment was not altogether surprising.. (Hat tip, Michael Rosen.)

The M7 went AWOL, too, though its website still lauds Doyle, and features Talgo among its high-profile "WINS FOR THE REGION."

U.S. assembly plant in Milwaukee.  Talgo, based in Madrid, had considered a half dozen sites for its U.S. plant. The 134,000-square-foot Milwaukee facility will assemble Talgo high speed trains for the entire United States and create up to 125 jobs initially.

Last year, Wisconsin Gov. Jim Doyle made a bold commitment to purchase two 14-car trains for $47 million from Talgo for Amtrak's Milwaukee-to-Chicago line, with an option to buy two more for a planned extension of that route from Milwaukee to Madison. The federal government has awarded the state $810 million in stimulus money for the Milwaukee-to-Madison route." 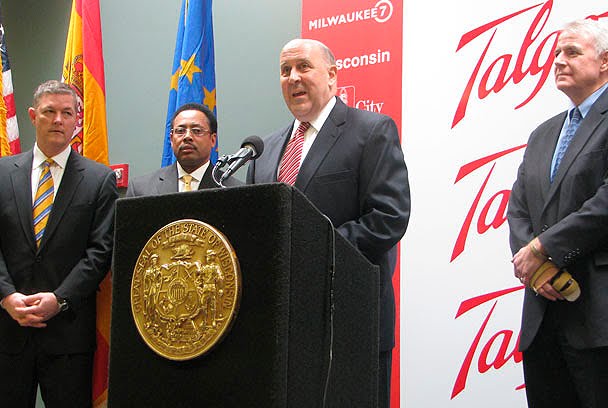