A report in the news yesterday- - text, video here - - provides more evidence that melting polar ice and warmer temperatures - - both setting records - - will make devastating storm surges like that which wrecked the East Coast during Hurricane Sandy more frequent and destructive. 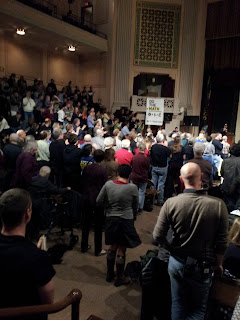 McKibben - - professorial, low-key and armed with plenty of data about fossil fuel burn, carbon emissions and the private and state corporations worldwide that are are its bottom-line beneficiaries - - has been sounding the alarm about climate change for a quarter-century, but it was a blockbuster piece he wrote earlier this fall in Rolling Stone - - posted here - - that got his current effort underway.

It's called 350.org. Here's its mission statement and website.

As did a summer of record heat, fatal forest fires and other severe weather events underscoring our changing climate and need for urgent and doable commitments to cleaner energy and respect for the planet.

McKibben repeatedly uses “facts” and figures which can be demonstrated to be false. He is not a scientist, let alone a climate scientist. He is a performer who gets paid for his performance, as evidenced by his Madison appearance. You may have gotten your moneys worth of entertainment but you have walked away poorer in knowledge if you actually believed him. If McKibben tells you that the sky is blue, it would be wise to go and look up for yourself.

I defy you to back that up. But give your inability to even supply your name, I expect little of substance.

Here’s what an actual climate scientist has to say about McKibben:
http://drtimball.com/2012/environmentalists-create-another-false-claim-about-climate-change/

Mckibben “ has made a career of presenting natural events as unnatural environmental disasters”
“We are victims of dogmatic science exploited for a political agenda by people like McKibben. It’s a dogma perpetuated in today’s education that is actually indoctrination. “

Perhaps someday even journalists will check their sources.

I see some name-calling and nitpicking.

Our friends at SourceWatch have some details on the "actual climate scientist" Tim Ball Tim Ball.

This should be an alarming message for all of us. Over the years, our carbon footprints drastically get high. And I think, everyone should be responsible enough in saving Mother Earth.
-Marcus Taylor, eye doctors in Long Island