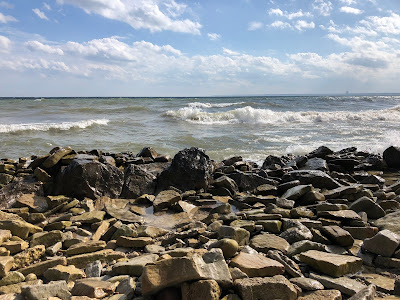 - that had been fought for years by the former Town of Waukesha - a/k/a the Village by the same name, now.

But that is the reality, as explained here -

In the complaint filed on Jan. 29, the village alleges that work on the project is already underway within its boundaries and that no permits were obtained from the village prior to construction.

"It's the village’s position that the city of Waukesha lacks the statutory authority to extend its water piping through the village of Waukesha without an agreement — without permission from the village," said Brian Fischer, village president.

So note that this lawsuit is about water, of course, but is also about community character and integrity, local authority and annexations, and cross-border development - then, now and later.

I'm happy to note that in following these issues for more many years - here's a 2007 item in the first year of my blog that references documents that are even   - I'd written this item in 2019 which sort of prepared us for the new litigation by the 'new' Village.

How a Waukesha Village can save a Town from a City

While the Lake Michigan diversion battle ended with only a sliver of the Town wrapped into the city's diverted water delivery area - - some history, here - -  the Town is now moving to stem further annexation losses which subtract tax base and erode its identity and independence by upgrading its municipality to Village status that brings it stronger border protections...

Annexation is something of a paradox for municipalities: The 'winning' jurisdiction grows geographically, but then has to extend costly taxpayer-paid services to its new residents and properties at its edge, where the delivery costs are the highest....

In fact, a major study by Midwest Environmental Advocates about water, conservation planning and law in Wisconsin published in 2005 found that annexations into the City of Waukesha were extensive, and virtually automatic.
From the study, pages 11-13:

The City of Waukesha’s growth over recent decades has been dramatic and shows no signs of abating. According to the 2000 Census, the City of Waukesha has reached a population of 64,825 people, making it the state’s seventh-largest city.58 By the year 2030, the City estimates that its population will reach 85,000 people, a 27 percent increase since 2000. (59)

In pace with these population projections, the City of Waukesha has been significantly expanding its boundaries. Data provided from the City of Waukesha Department of Community Development’s Planning Division demonstrates that the City, over the past 20 years, has increased in size from 15.5 square miles to 23.6 square miles, reflecting a 52% expansion...

Moreover, city planners concede that annexations of property bordering the city occur on a regular basis, as developers continue to buy up farmland and then petition the city for annexation. In the last five years alone, over 1,300 total acres have been annexed by the City of Waukesha, with over 4,413 total acres annexed in the past 15 years.(66)

,...the annexation process is simple and driven by land developers, who after buying up neighboring farmland,(68) initiate the process by petitioning the City Clerk for annexation. Following State Department of Administration review, and approval by the City Plan Commission, the city’s Common Council invariably accepts the petition for annexation.(69)

It looks like the Town of Waukesha has found a way to preserve its character on its own terms.

Throughout all of this massive expansion in Waukesha the DNR had been telling the city about the problems with their wells. Problems that had no practical fix in the face of all of the expansion let alone for existing residents. But flat out greed pushed Waukesha developers further and further because to them it was "someone elses problem" and they were just "builders". The DNR files are all there for anybody to go and see. Remember that this all happened while Waukesha, developers and realtors were doing everything they could to keep stoking "white flight" and knowingly, purposely and admittedly manipulating school desegregation efforts to drag them toward failure. Now they come begging for help and making demands. The humane response requires us to help but it should come with imposing a very high price that reflects the willful damage that was purposely inflicted on Milwaukee County all these years.