Republicans hold majorities in both Wisconsin Legislative chambers where the GOP 'style' of governance these days is all about ducking accountability, living by laziness and evading even the pretense of responsibility.

You may remember that former GOP Governor Scott Walker got caught trying to quietly remove the state's commitments to truth and public service from the "Wisconsin Idea," but GOP legislators have taken that assault on Wisconsin fundamentals to what seems like a bottomless low.

How else to describe GOP-led Legislature's nine-month, fully-paid vacation during the pandemic's 2020 rampage and nearly year-long focus on further diminishing of Gov. Evers' administrative powers rather than writing or promoting or cooperating on a pandemic-fighting plan?

A thoughtless contempt for public health and life itself summed up in August, when despite exploding COVID19 caseloads and deaths - official data, here - then-Senate Majority Leader Scott Fitzgerald approvingly said people were 'complying if they want to' with Governor Evers' statewide masking mandate, and that was OK because things on the pandemic front were "going pretty well."

We've had about a half-million COVID19 cases since Fitzgerald all but dismissed it as freedom's price for spreading the virus as you please - a sick scenario just now expanded because Legislative Republicans have wiped out Evers' masking mandate.

Though Republican legislators' last-minute cover-your-a** amending may fail to prevent the loss of almost $50 million a month in federal emergency food aid related to pandemic unemployment in Wisconsin - a risk Republicans are willing to take with people's most basic needs.

Your new Wisconsin Idea in action. Not by inaction, but by deliberate, calculated, calibrated malfeasance.

But while we're focused on this poisonously-partisan power-grab, please note the bonus bit of breezy, take-it-or-leave-it nonchalance on another important front that WI GOP Assembly Speaker Robin Vos has added to his party's retreat from the hard work of leadership. 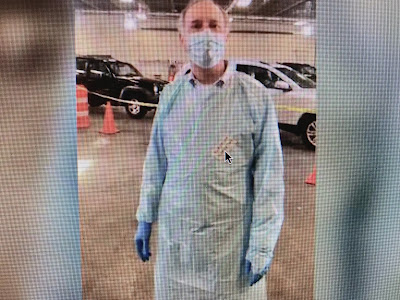 - Vos has now laid down a new do-as-you-please marker for contractors doing business with the taxpayer-funded State of Wisconsin.

CEO's and their bean counters haven't been given news this good since Ron Johnson sent them an even bigger dollop of dollars through the 2017 Federal tax 'reform' bill.

Vos's latest step away from accountability was an excuse he opted to confer on the Republican-championed Foxconn fiasco bulldozed into the Village of Mt. Pleasant which, according to state auditors, has yet to hit - and won't hit for three more years - its hiring targets at the radically reduced and redefined project in Mt Pleasant.

No matter to Assembly Speaker Shoulder-Shrug who explained that he'd put himself on the state development commission to make sure Foxconn is allowed the contracting equivalent of Fitzgerald's 'comply if you want' - more or less.

"I wanted to make sure that Foxconn and the people of Racine County are treated fairly and that we had a deal that, more or less, stuck to the original goals that we set."

Now I'm not recommending you offer the GOP-defining 'more or less' standard or the party's 'comply if you want' option when discussing things with an IRS agent or a State Trooper with a radar gun, but I do recommend the statement below issued Wednesday by some of Vos's constituents about what contract compliance by Foxconn in Mt. Pleasant looks like to them, more or less:

“Foxconn is failing to fulfill financial obligations in Mount Pleasant while local spending continues in preparation for a factory that is not happening.”

MOUNT PLEASANT, WI FEBRUARY 3, 2021 - A recent article in the Milwaukee Journal Sentinel regarding the ongoing contract renegotiations between the Wisconsin Economic Development Corporation (WEDC) and Foxconn related to the controversial LCD factory which Foxconn promised to build in Mount Pleasant featured several statements offered by state representatives, Robin Vos and Van Wanggaard, about the project that were not just misleading, but factually incorrect.

In response to a question on whether new state legislation would be needed to renegotiate the contract that WEDC has determined to be broken, Senator Wanggaard claimed “Foxconn is in substantial compliance with their existing contract...” This is false.

According to the written agreements, Foxconn is required to (1) build a 10.5 Generation LCD factory, (2) create and maintain approximately 13,000 full-time jobs, with an average salary of at least $53,875 plus benefits, and (3) invest approximately $10 Billion, mostly Area I in Mount Pleasant. There is no ambiguity about those terms in either the State contract or the local Development Agreement.

Further, Foxconn was required to have improved Area I by a minimum of $685 Million by December 31, 2019, but in its Performance Report submitted to WEDC, Foxconn reported that it had spent only $208.3 Million.

Foxconn is also required to add a value of $347.3 Million in 2020, and another $358.2 Million in 2021 in order to reach a total minimum assessed value of $1.4 Billion by January 1, 2022, and a minimum tax bill of $31.1 Million for the next 26 years. Having submitted no new development plans since 2019, and with the absence of any open bid packages for work to be performed in Area I, it is difficult to imagine how they will achieve that valuation. Indeed, Foxconn has not come even close to fulfilling their financial obligations in the State and local contract.

Representative Vos would have the public believe it doesn’t matter what Foxconn makes, stating the decision to withhold tax credit payments to Foxconn is "a bunch of B.S" and “Do you care or does the taxpayer care if they’re making a TV or a circuit board? It doesn’t really matter.” Actually, what Foxconn makes does matter in order for it to meet its contract obligations.

The Generation 10.5 LCD factory Foxconn promised to build is beyond massive. It would have required at least 10,000 full-time jobs to operate and a $10 Billion investment to construct. The supply chain of manufacturing would have employed thousands more, and it would have required 10,000 construction workers each year for several years.

In the last three years, Foxconn has constructed only two buildings in Area I - the “Multi-Purpose Building,” a 120,000 square foot warehouse in which there are a small number of employees reportedly assembling circuit boards; and a 1 Million square foot building that was supposed to house the LCD factory. Instead, a small number of employees are assembling coffee kiosks and a portion of the building is being used for storage. Foxconn’s disappointing efforts netted a total of 281 jobs in 2019, far less than their goal of 2080 full-time jobs.

According to the Wisconsin Division of Executive Budget and Finance, Foxconn’s LCD factory building is not even equipped to fabricate glass substrates but rather, “it appears to be a place equipped to perform assembly operations, and may be better suited for demonstration purposes rather than as a viable commercial glass fabrication facility.”

It is unlikely that Foxconn will ever employ more than 1,500 full-time employees, which will be relegated mainly to low-level assembly work. A far cry from a technology hub that was promised to be the “eighth wonder of the world.”

According to the Journal Sentinel article, Representative Vos claims “the agreement was centered around jobs, wages and the company building facilities,” but then he turns around and says “...All that really matters is how many people they employ and what they pay them.”

Mr. Vos conveniently leaves out two key components of the contract - the building facilities and the investment necessary to build them. 13,000 full-time jobs, at least $53,875 per year plus benefits, a 20 Million square foot manufacturing facility, and a $10 Billion investment.

Those components are the only reason the State agreed to offer nearly $3 Billion in tax credits and why Mount Pleasant agreed to spend approximately $1 Billion in infrastructure and land acquisitions.

Senator Wanggaard and Representative Vos point out that Wisconsin has not paid any tax credits to Foxconn, but conveniently fail to recognize the hundreds of millions of dollars the Village of Mount Pleasant and Racine County have already spent on property acquisitions, infrastructure and financing.

They want you to forget about the 80 homes demolished for the project, many of which were unnecessary, and 2,500 acres acquired for the project, most of which sits vacant. Nevermind the $113 Million spent on an electric substation and power lines that will be paid for entirely by ATC’s ratepayers, and millions owed by Mount Pleasant to the Racine Water Utility for water Foxconn isn’t using.

Our local and state leaders, like Senator Wanggaard and Representative Vos, have known for years that Foxconn was not going to build what they promised. That knowledge did not prevent them from sinking our Village into unprecedented debt. Nearly $1 Billion of debt that is guaranteed, in part, by Wisconsin taxpayers if Foxconn defaults.

WEDC has declared the original deal with Foxconn to be broken and requires renegotiation,  while our local politicians tell us that the local agreement, which calls for the same factory, jobs and investment, is intact and operational. It is not.

Mr Wanggaard and Mr. Vos aren’t just gaslighting their own constituents into thinking everything is fine. They are covering for the colossally irresponsible deal they struck three years ago that is turning out exactly as many experts anticipated.

A Better Mt. Pleasant is a nonpartisan, community organization dedicated to advancing a fair,

Yep, take all the credit but take none of the responsibility. That's the way Vos and company roll.

And as you mention, they will do nothing as long as they can, no matter how many people get hurt in the process.

And they have no problem having things get screwed up so they can make Evers look bad.