The Green Bay Packers won the Super Bowl ten years ago this weekend.

After which newly-elected Wisconsin GOP Governor Scott Walker quickly destroyed the joyous, unifying statewide vibe when he 'dropped [his Act 10] bomb' on unionized teachers and other essential public sector employees to curry favor with anti-union donors.

And to fuel what would ultimately be his historically-short and flawed 2015 presidential bid.

But Walker was riding high in 2011 and had no use for modesty when caught bragging about Act 10 to a caller he thought was the influential anti-union billionaire David Koch:

This is an exciting time. This is — you know, I told my cabinet, I had a dinner the Sunday, or excuse me, the Monday right after the 6th. Came home from the Super Bowl where the Packers won, and that Monday night I had all of my cabinet over to the residence for dinner. Talked about what we were gonna do, how we were gonna do it. We’d already kinda built plans up, but it was kind of the last hurrah before we dropped the bomb. And I stood up and I pulled out a picture of Ronald Reagan, and I said, you know, this may seem a little melodramatic, but 30 years ago, Ronald Reagan, whose 100th birthday we just celebrated the day before, had one of the most defining moments of his political career, not just his presidency, when he fired the air-traffic controllers. And, uh, I said, to me that moment was more important than just for labor relations or even the federal budget, that was the first crack in the Berlin Wall and the fall of Communism because from that point forward, the Soviets and the Communists knew that Ronald Reagan wasn’t a pushover. And, uh, I said this may not have as broad of world implications, but in Wisconsin’s history — little did I know how big it would be nationally — in Wisconsin’s history, I said this is our moment, this is our time to change the course of history.

And in the divisive aftermath he liked to share with donors, Walker came to display more character-free shallowness beyond grandiosity by cloaking his anti-union crusade in false narratives about campaign transparency, fiscal responsibility and other good-government goals to which he was not entitled:

* So he lied about having run on Act 10 in the 2010 campaign - a falsehood revealed by the record and by his own language - 'dropped a bomb - on state citizens.

What kind of a chief executive treats his citizen workers as targets? 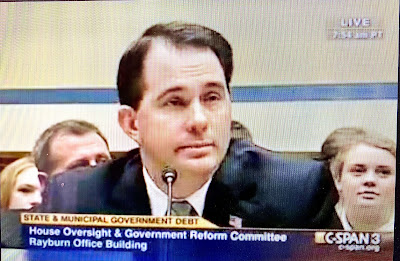 * It was a falsehood Walker also tried to paper over by treating a reporter perhaps to a Jonathan Swiftian metaphor by calling Act 10 a merely 'modest' proposal.

OK - that's probably giving a politician who hadn't shown much interest in book-learning.

* But if false modesty wasn't the right shade of lipstick for the Act 10 pig, how could Walker explain this more indelible shade Walker applied by the bucketful - that Act 10 was a union rights preservation bill.

A characterization so bigly and boldly dishonest that Journal Sentinel's fact -checkers  had to label it ridiculous:

And that means it is Pants on Fire.

And because the past is prologue, and you can't teach an old dog (or dog-whistler) new tricks, Walker reprised his super 2011 workplace slipperiness four years later by signing a 'right-to-work' [Sic] bill into law that shafted private-sector workers after he'd repeatedly said he opposed it:

And flash forward to today, Saturday, ten years after Act 10 was delivered and we find an out-of-office Walker still on his self-serving-one-note anti-union message.

John Nichols: Now Scott Walker is exploiting the pandemic to — you guessed it — attack teachers and their unions

James, thank you for all your excellent reporting of the total destruction that the gerrymandered GOP Cabal has inflicted on the once great state of Wisconsin. As one of the targets of a decade of Act 10, I appreciate reading the writings of independent journalists like yourself who consistently expose the LIES perpetrated by the corrupt Republican Cabal that rules Walker's Wisconsin like a fascist Dictatorship.

Throughout the past decade, I have educated younger teaching colleagues of the permanent damage to their teaching careers from Act 10. I am happy to note that thousands of great teachers have fled Walker's Wisconsin since 2011, with a resulting severe teacher shortage in 2021. For years, school districts in neighboring states have had the "pick of the litter" when hiring as scores of Wisconsin teachers are applying for positions in states across America, and especially our neighboring states of Minnesota & Illinois.

To show the destruction to teachers' lives and careers caused by a decade of Act 10, a group of activists is updating the dormant website www.teachinginwisconsin.com to compare how every school district in Wisconsin has treated it's teachers and District Administrators during a decade of Act 10, AND how that compares to the neighboring Minnesota, that didn't have a Governor who divided his state in 2010.

Thank you for sharing your story and the broader information. I appreciate your being a reader here. Take care.

As a former educator I can always honestly say I have never gotten over act 10. It’s a few short months and a stroke of a pen I take home pay decreased 10%, control over my workplace disappear, and the right to unionize essentially vanish. What hurt the most was friends and neighbors who would call me a liar when I explained how things really worked.

To Middle class guy: I appreciate your making this history so understandable. Take care. jim