The Milwaukee Common Council is boosting its opposition to a ground-level expansion of I-94 past Miller Park, across the face of the Story Hill neighborhood and in the face of several close-by cemeteries.

Ald. Bauman introduces resolution directing the City to lobby against I-94 reconstruction

It's important to understand that this costly, taxpayer-paid expansion has been opposed by both the City of Milwaukee and the Milwaukee County Board, for years.

It was forced into a seven-county regional highway expansion plan by the sprawl-inducing-road-building crowd in the counties which surround Milwaukee and dominate the regional planning commission - and which has included then-Milwaukee County Executive Scott Walker, long-time Metropolitan Milwaukee Executive Director Tim Sheehy and others.

I have often documented the effort to expand the so-called (because it's hardly 'free') freeway system through a city that does not want to lose more value while acquiring more pollution at public expense.

The Milwaukee Common Council went on record against the project in 2003.

Here is its letter.

Also - here are some of numerous blog postings about this grindingly long process:

Ald. Bauman and grassroots opposition from the group Coalition Allied for Highways, (CASH), in 2007; an initial documented item from 2009; Story Hill's opposition, 2013; the coordinated resistance by Milwaukee social justice organizations, 2014; and this 2015 summary from which I will quote extensively:

Walker led the charge for unsustainable overspending on highways in SE WI that you now don't like.

The Wisconsin Legislature is grappling with a state highway budget unsustainably bloated by reckless borrowing and overspending on the so-called SE 'free'way system - - a problem that has helped stall the entire state budget process while preposterous presidential hopeful Scott Walker keeps skipping out to campaign from Iowa to New Hampshire and beyond.

So it's important to remember that Walker - - as Milwaukee County Executive - - played a key role in 2003 on a SE regional planning commission advisory committee which voted, without a companion financing plan, to recommend to state highway planners that Wisconsin add to the SE 'freeway' system themaximum number of new lanes among the alternatives considered - - 127 miles of lanes instead of 108 - - in what ultimately became a $6.4 billion package.

Walker's motion added an estimated $750 million to the ultimate price tag and also increased the number of structures and land removed from the tax base.

Though the price tag of the still-incomplete-and-still-unfunded Zoo Interchange has come down from its original projection, other segments of the seven-county system have not begun or may be delayed, further driving up their estimated costs - - all of which are in 2003 dollars.

The regional planning commission - - SEWRPC - - often turns major projects over to advisory committees - - and in this case, the full SEWRPC commission accepted the recommendation and forwarded it to WisDOT, which, in turn, accepted it as the unfolding blueprint for billions in SE WI highway work that continues to be underfunded.

I attended the advisory committee meeting where Walker made his accepted motion for the full lanes' expansion that added 19 miles of construction cost, and I wrote about it for this blog in June, in 2009: at the highlighted link, begin on page 7 of the advisory committee's report for Walker's motion and comments in the minutes, with the final vote at the end of the committee report.

These are the key sentences from the meeting minutes with regard to motions and votes:

Mr. Walker moved to amend the motion such that the final plan would include the provision of additional capacity on 127 miles of the regional freeway system – specifically, adding to the 108 mile recommendation the widening to eight lanes of IH 94 between the Marquette and Zoo Interchanges and of IH 43 between the Mitchell Interchange and Silver Spring Drive, as proposed in the preliminary recommended plan....

Chairman Drew asked if there was any further discussion or possible amendments to the main motion. There being no further discussion or proposed amendments, Chairman Drew asked for a roll call vote on pages 14-19 of Chapter VII as amended to include the provision of additional capacity on 127 miles of the regional freeway system and to recommend that the WisDOT present to the State Legislature and Governor a financing plan before proceeding to the reconstruction of each freeway segment.

Final note: Recent I-94 expansion south to the Illinois border was pushed by Team Walker to service the failed-so-far Foxconn development - a project which the state says will take "prime farmland" from 59 owners.

- after having devastated Milwaukee's African-American community for the convenience of north shore commuters.

The expressway disconnected black people by running right through neighborhoods and sliced east-west streets in half. It harmed commercial business and sent loyal consumers elsewhere.

And state planners, along with special interests and obeisant politicians have for years derailed train service so road-builders could continue to feast at the public trough.

State officials had to be sued under civil rights law to spend even a relative pittance on bus services.

And the same 'conservative' politicians have systematically curtailed coordinated bus and rail investments by disallowing the formation of Regional Transit Authorities, or RTAs - a pro-road-building move engineered by GOP Assembly Speaker Robin Vos:

The real issue here, besides general GOP aversion to transportation spending that benefits people who would prefer not to drive cars, is that RTAs might raise revenues without the permission of state legislators, and that simply cannot be allowed in tea party-driven, Vosian ideology.

Another real issue -- again, for Republicans -- is that mass transit tends to be in most demand in more heavily populated, urbanized areas, which often skew politically blue. And Republicans are too often loathe to help those regions.

So here we are again; the state wants to squeeze in another expansion of I-94 through an urban corridor where local officials and residents do not want it.

Hasn't this antiquated and exclusionary mindset already been allowed to take more than its fair share? 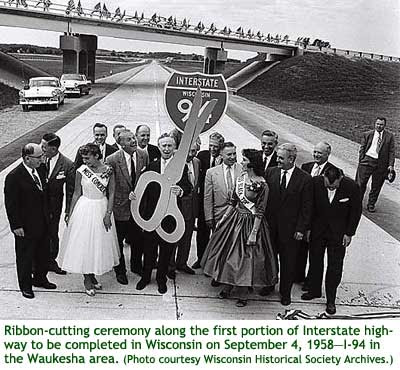