Another day, another cringe-worthy display by one of Wisconsin's worst - and it's not Ron Johnson this time - whom BadgerLand voters sent from a gerrymandered-safe GOP Congressional seat so he could prove there's more than one way to attack the US Capitol.

Today's repulsive and not random display of rotten Republicanism is courtesy of the overpaid and under-qualified US Cong. Glenn Grothman, who shamed our state on the floor of the US House today with another of his reflexive relapses into open bigotry.

Aaron Rupar
@atrupar
·
2h
Glenn Grothman brings up Black Lives Matter and then says, "I know it's a group that doesn't like the old fashioned family."

"We have been able to keep our families alive for over 400 years ... how dare you say that we are not interested in families?" 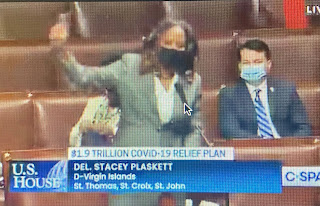 But why should the public, and especially African-Americans, have to put up with this of openly racist crap?

Remember that Grothman has said things like this before - note here his related attacks on single mothers and 'gals' allegedly reaping public assistance windfalls - yet, or perhaps that's why Wisconsin Republican voters keep re-electing and promoting him.

Here is one blog post linking to just some of Grothman's earlier base-stirring rants - the focus is about his obsession with Kwanzaa::

...it's hard to chalk up the reported rant against Kwanzaa by State Sen. Glenn Grothman, (R-West Bend), to anything other than gross ignorance and intolerance:

Calling it a holiday that "almost no black people today care about," state Sen. Glenn Grothman is characterizing Kwanzaa as a false holiday conjured up by a racist college professor and perpetuated by hard-core liberals.

"Why must we still hear about Kwanzaa?" the Republican lawmaker from West Bend asked in a press release. "Why are hard-core left wingers still trying to talk about Kwanzaa — the supposed African-American holiday celebration between Christmas and New Year’s?"

Senator Glenn Grothman calls for Kwanzaa to be “slapped down”

Grothman, a Republican lawmaker from West Bend issued the press release during the week of Kwanzaa, calling it a "supposed African-American holiday celebration between Christmas and New Year's..."Dr. Karenga is a racist separatist who wanted to destroy the country in 1966."

In 2014, while making his successful run for US Congress, a reporter asked Grothman how he knew that few black people cared about Kwanzaa.

"Of course, almost no black people today care about Kwanzaa," he said. "Just white left-wingers who try to shove this down black people’s throats in an effort to divide Americans.”

A reporter had asked Grothman to back up his views:

In response to questions about his authority on the matter, he told me that he had "polled 20 black people at random" at airports in Los Angeles and Phoenix.

Just when you thought the current crop of Wisconsin Republicans couldn't be any more dim-witted...

Yes, they never fail to disappoint.

Maybe they don't like your kind of family, where they're standing in subjugation while they light your cigar for you at the local country club...

What a wanker Grossman is!