Psychiatrists and political scientists now have more Republican retreat from reality to review as the saga of Ron and The Don stays in perpetual motion.

This rich vein of material began earlier this month:

Plus, the role reversal between apprentice and mentor in mere days will definitely attract students of psychological relationships, various dualisms or walk-ins, and other forms of interpersonal shape-shifting.

Ron Johnson - 45's apprentice - goes deeply to the dark side

Side note: Here is a running list of those charged in Federal Court so far for their roles in the Capitol breach and riot which Johnson has suggested may have been nothing more than "jovial, friendly, earnest" exuberance as one would see perhaps at a large picnic or sidewalk merchandise sale.

Further side note: Johnson also is associated with followers of a former federal prosecutor whose mind may also be on the fritz, so some of this phenomenon may be contagious and transmitted, as if it were a virus.

All in all, a big day for political neuroscientists, historians, headline writers and sci-fi buffs. 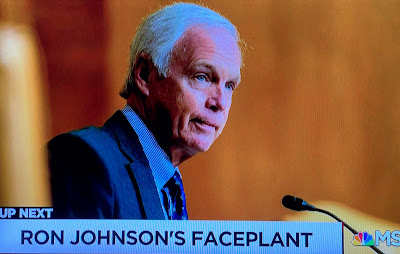