Stop the presses; Joe McCarthy reincarnation Ron Johnson is hinting - oh, the drama about keeping one's word! - that he might keep a pledge to depart after two terms, according to the Wisconsin State Journal.

Though "probably my preference now" was how he framed his layered inexactitude, on top of what the newspaper said was Johnson's "a big caveat."

“I think that pledge was based on the assumption we wouldn’t have Democrats in total control of government and we’re seeing what I would consider the devastating and harmful effects of Democrats’ total control just ramming things through,” he said.

Which brought to mind Scott Walker's weaselly-worded non-binding pledge, er, plan of sorts in late 2014 to serve out a full second term not long before he began an ill-fated presidential run that had it been successful would have cut that second term in half.

So, again, fellow consumers of political news, Caveat Emptor. You don't want to get suck in by politicians' promises that carry all the veracity of yet another Foxconn promise which went unsurprisingly bad a few days ago.

Foxconn's plan to make robotic coffee kiosks quietly died. It joins the list of products promised but never made.

The first product coming out of the Foxconn Technology Group facility in Mount Pleasant was supposed to be robotic coffee kiosks. But the coffee kiosks — along with ventilators and large LCD screens — join the list of products that were promised for the massive site, but never delivered.

And in that vein of truth-in-politics and keeping up with its players, when news editors assign end-of-the-era-in-his-own-mind Ron Johnson stories which will feature his self-inflicted failure to withhold public assistance from COVID19-damaged businesses, government and families nationwide - 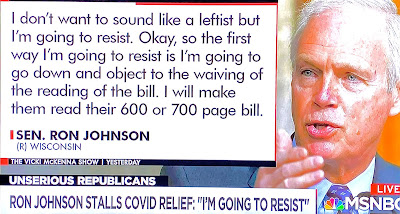 let's make sure any career encapsulating Johnson stories highlight selections from his long, loathsome legacy which include the millions of dollars in public assistance the family business Johnson helped run was only too happy to accept -  twice - prior to his massaging the 2017 US tax 'reform' bill that ended up doing family business another solid.

Editorial: Ron Johnson looks out for himself

Please do not say that this moron sees the writing on the wall. He is a typical materialistic jackass. He sees $$$$. Hard to say where he will go but there is certainly a spot for a guy with no moral compass who can lie about anything. I doubt if he has a Fox gig lined up because he is too inarticulate. Yes they have many babbling idiots, but this guy is actually incoherent in his ramblings. Why has nothing come out of his business sale, or should I say the sale of his wife's family business gifted to him? Has anyone looked to see how much money he staked on Hydroxychloroquine? What about his crooked use of Homeland Security? He may be the worst POS politician this country has seen in the senate, including McCarthy.

He may be seeing that Walker is making a good living with Koch-funded wing but welfare, and RoJo might prefer that to a year of getting drilled by tens of millions of Resistance donations.

If he was smart, he’d do that. But this is (mo)Ron Johnson, so he’s probably acting like a scared, cornered rat instead