Awash in public benefits, WI man blocks healthcare for others

As I recently predicted, WI GOP Assembly Speaker and fake fiscal conservative Robin Vos renewed his #never stance against expanded Medicaid health care coverage for low-income state residents - even though it would save the state treasury more than a billion dollars and keep tens of thousands of Wisconsinites alive, well and productive.

This is the slogan-and-talking-point nasty pant load Vos left behind at the State Capitol Thursday to justify his falsely compassionate-but-truthfully-cold-hearted campaign to keep poor people in Wisconsin poor- and certainly in poor health:

"I think the State of Wisconsin has enough resources to be able to utilize, to make sure we have all of our priorities funded and we're not going to do it by expanding welfare," said Assembly Speaker Robin Vos of Rochester.

"Trapping people in the life of poverty is not something that there's ever the right amount of money to do."

And as a matter of fairness and honest framing, no one who leads one-half of what has been called the least-active-and-laziest state legislature in America...and who gets state-subsidized medical care and pension contributions, and state-provided telephones, parking, computers, and constantly-expanding staff...and repeatedly can hire taxpayer-paid lawyers to pay for self-serving and partisan litigation, and easy access to state aircraft...and can accept and raise the level of automatically-dispensed and receipt-free meal, mileage and lodging reimbursements for his colleagues and himself...and collects a monthly taxpayer-paid paycheck - whether campaigning, working or vacationing - 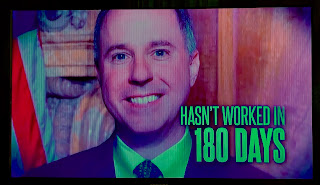 - should be permitted to demonize health care coverage as 'welfare', let alone deny that coverage which will save and improve the lives of those who do not enjoy Vos's extensive levels of 'welfare.'

Here are my remarks just nine days ago about Vos rejecting newly-available federal Medicaid funding to which Wisconsinites have already contributed their share, by the way:

Robin Vos and Republican fake rationality refuseniks have consistently said 'no way, never' - even though Wisconsin taxpayers have to make up the lost hundreds of millions of dollars through state taxes.

But will Vos and the rest of his counterfeit conservative caucus continue their war on public health, the poor and the state treasury now that Biden's economic recovery bill specifically adds so much new Medicaid funding that states like Wisconsin will actually make money if they take the newly-available funding?

Medicaid expansion. Twelve states have still refused to accept the ACA’s expansion of Medicaid, leaving huge numbers of poor citizens without health coverage. The ARP boosts the federal contribution to Medicaid so that holdout states will actually make money if they accept the expansion.

I'm betting that Vos's answer will remain #never, because in the little state capitol world where he rules, ideology is everything and the rest is #never.