Ron ("The Wisconsin Stuntman") Johnson is Ted Cruz without the charisma

Ted Cruz has held the Most-Hated-Senator title since his Senate-paralyzing filibuster a few years ago nearly took the country over the fiscal cliff, but our own Ron ("The Wisconsin Stuntman") Johnson - think Cruz, but without the charisma - just might wrest the trophy away with a stunt that will needlessly drag out COVID-related financial suffering among millions who do not have Johnson's millions to fall back on:

Axios has a more on-point headline above Johnson's photo:

Just another reminder that GOP Senators are not expected to do the right thing on the job, as a party official recently reminded them:

GOP official on Toomey: Wasn't sent to 'do the right thing or whatever he said'

Interesting that an even more-cumbersome bill reading stunt failed to materialize on the Senate floor in 2017.

That's when Kentucky Sen. Rand Paul wanted a vote on the very, very long tax 'reform' bill delayed for a deliberately-slowed reading - an effort that failed - but which could have afforded Johnson the time to explain how 11th-hour language he forced into the bill was beneficial to the family business which had helped create his millions.

The Wisconsin Stuntman performed Senatorial showboating even before he became a Sunday morning news show clown, then a promoter of fringe 'science, and, of late, the goofy-climate-change-denier-turned -insurrectionist-denier. 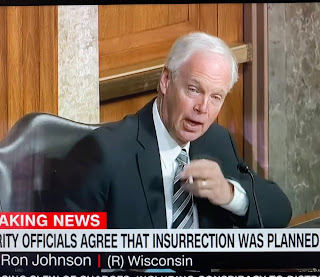 Remember when he filed a lawsuit against Obamacare? Jim Sensenbrenner, Wisconsin's senior GOP Member of Congress at the time, spoke truth to his junior Capitol Hill colleague:

The unusual intraparty fight was triggered by Sen. Ron Johnson’s (R-Wis.) new lawsuit against the Obama administration, which takes aim at the federal contributions that lawmakers and their staffs get for health insurance under the Affordable Care Act (ACA)....

“Sen. Johnson’s lawsuit is an unfortunate political stunt,” Sensenbrenner (R-Wis.) said. “I am committed to repealing ObamaCare, but the employer contribution he’s attacking is nothing more than a standard benefit that most private and all federal employees receive — including the president."

The lawsuit was tossed out of court by a Federal judge nominated by former President George W. Bush, a Republican.