The US Supreme Court declined to restrict the public's traditional access to beaches along the Great Lakes.


The public's right to walk along Great Lakes shorelines, even adjacent to private lakefront property, remains unchanged, after the U.S. Supreme Court on Tuesday declined to take up an Indiana case that sought further clarity on where people can stroll along the waterline...
the State of Indiana's definition for land available for public use along the Great Lakes shoreline — the "ordinary high water mark" [is] delineated by wave action and where plant life is aquatic or washed away. 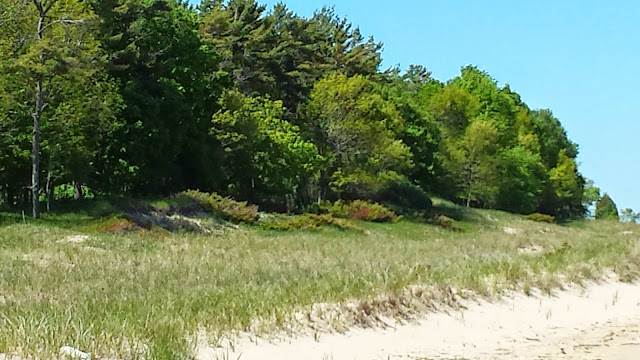 - - and extending for several acres into the state park - - which runs close to Lake Michigan.

I'm not a surveyor, and the property's dip towards the water is irregular, but there should be public access between the land and the water there - - though you might need water-proof footwear, no?

Here is some of what DNR has said the "ordinary high water mark,"  or OHWM, issue in Wisconsin:

The Ordinary High Water Mark - what is it?

Under Wisconsin’s Constitution, lakes and rivers belong to everybody and DNR manages them for the benefit of all citizens. The state Supreme Court has ruled that the state owns title to lakebeds (not streambeds or flowed lands) and that the Ordinary High Water Mark (OHWM), establishes the boundary between public lakebed and private land.
In 1914, the Wisconsin Supreme Court defined the OHWM as “the point on the bank or shore up to which the presence and action of the water is so continuous as to leave a distinct mark either by erosion, destruction of terrestrial vegetation or other easily recognized characteristic.”
Water marks are often at various elevations, but the most permanent and prevalent marks constitute the ordinary high water mark. The OHWM doesn’t change with temporary fluctuations in water levels, nor is it always at or near open water, as is the case with cattail marshes and bogs. The Supreme Court has ruled that the area between the water’s edge and the OHWM need not be navigable to be held in the public trust.

How it affects your property

With undeveloped waterfront in Wisconsin becoming scarce, properties once bypassed because they didn’t have the more desirable sand beach or cobble edge are now being sold and subdivided. These sites often have wetland-fringed shorelines or other features that make it less easy to identify where private property ends and public water begins.
The Ordinary High Water Mark (OHWM)-- where the regular action of water against the bank leaves a distinct mark -- determines the extent of public water. This mark isn’t typically identified on surveys and may be difficult to see on some sites. As a result, some property owners have recently discovered that when the OHWM is identified, land they thought was theirs is actually public lakebed.

Has DNR changed how it sets the Ordinary High Water Mark?

No. DNR staff and others determine the OHWM today in the same way as it was defined by the Wisconsin Supreme Court and other courts in decisions dating to the late 1800s.
What’s changed is that OHWMs aren’t as easy to identify on many of the properties being developed today. In addition, many property surveys done in earlier decades used the water’s edge, not the OHWM, in setting boundaries.

This is great news!

Thank you for helping us stay informed of our rights to access the waters of Wisconsin. We are so lucky to have this resource, we should all enjoy and protect it as the global treasure it is.