Should The Expanded I-39/90 Be Wisconsin's First Toll Road?

All the powers that be in our penny-pinching, 'broke' state (wasn't there just another deficit dealt with, principally through cuts to higher education?) are singing the same old song about highway expansion=economic development and lauding a $715 million plan to fix up and add a lane to I-39/90 between the Illinois line and Madison.

Mind you, this is on top of Southeastern Wisconsin's behemoths: the $1.7 billion Zoo Interchange project kicking off next year, the $1.9 billion I-94 north/south rebuild-and-new lane additions now underway from Milwauukee to the Illinois line, and $2+billion more scheduled past 2020 on the misnamed 'freeway' system through Ozaukee, Waukesha and Walworth Counties, too.

Not to mention at least $240 million to rebuild the Hoan Bridge and I-794 over the Milwaukee Harbor and another $207 million for an extension of I-794 past Cudahy into Oak Creek getting an initial thumbs-up from a regional planning committee here.

And by the time it's all done, we'll be reading about planning to re-do the Marquette Interchange, again, and on and on and on...but back to I-39/30, apparently the state's miracle highway in the making:


BELOIT — Officials unveiled Thursday one of the most expensive highway projects in state history, but it is designed to do more than ease congestion.

The $715 million reconstruction and expansion of a 45-mile stretch of Interstate 39-90 between Madison and the Illinois state line will aid state tourism and help create more economic development along the corridor, one of the busiest stretches of highway in the state, officials say...

"Confidence," says the Transportation Secretary. Three times in three sentences. I believe we just witnessed the birth of a talking point. Now highways move traffic and elevate our self-esteem, too.

Here's a fresh piece of the new Sawyer Rd. interchange off I-94 in Western Waukesha County. Doesn't it make you feel good? 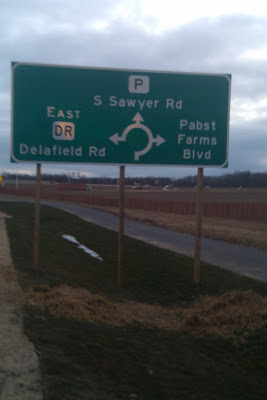 And talk about one-sided reporting on the one-dimensional freeways=development equation as it pertains to the I-39/90 plan: no hard evidence for the thesis, no contrary views, no alternative plans presented, no one in the story embracing options or small government or austerity.

It's an open-and-shut case. Just get us some new lanes and screw the price - - which does not appear on the official WisDOT Q&A web page for the project, because cost is not a real part of the discussion.

Can we afford it?

Not important: Just build it and charge it. knowing the full cost gets buried in the fine print of out-year budgets long after the eight years of construction has ended and everyone is distracted by the new lanes and 'improvements' grabbing our attention elsewhere.

But it's a real question. Because this time the state's share is growing to 70%, a lot more than the typical 10-20%, with the federal government picking up a smaller share of the tab.


[Note: I buried the lede, as initially I had the percentages and cost-shares flipped. Hat tip, E Robinson. Here is what the State Journal article says:]

Unlike most major highway projects where the federal government can cover 80 to 90 percent of the work, the I-39-90 project will be 70 percent state funded and 30 percent federal, said John Vesperman, the Department of Transportation's project chief.


I'll bet some of the cheer-leading for this expensive roadwork and the long list of big new road projects statewide would dissipate if the debate and narrative were changed up a little.

How about the State Legislature - - now content to bill residents through stiff per-gallon gas and other taxes, and bonding interest - - instead talked up and bought into tolling the road to come up with some of the state's $500+million share - - and also collected tolls to pay for the 'routine' annual maintenance, plowing, patrolling and repairing costs no one ever adds to projects' bottom lines.

I didn't think so.

So we can afford these billions for new roads even though Walker canceled the Madison-Milwaukee Amtrak rail extension that was 100% paid for by the feds because the state would have had to pay about $750,000 in annual operating costs.

And wouldn't $500+million in state funds fill a lot of potholes and resurface a lot of town, village and city roads - - with a few bucks left over to throw towards ailing bus systems, too?

I say: let the Legislature put tolls on the table.

Just mind the stampede for the exits. It won't build your confidence in the legislative process.

The far right wing republican "think tank"(term used loosely) WPRI has been pushing for tolls for a while now.

And note the funneling of general fund money into the Transportation fund, which is $160 million in this budget, and only grows from there.

If you want to build the road, stop the money-funneling, and start up the tolls.

Tolls will trip off instant recalls.

Wisconsin state constitution bans toll roads. That's why they aren't in Wisconsin currently. If toll roads are a possibility, I say, charge anyone with an out-of-state license plate.

@ Brendan Z. I don't think that is correct. The legal impediment is federal approval for collecting tolls on roads built with federal funds. What used to be a flat prohibition is now OK under certain circumstances.

Recommend button not working for me, or I'd recommend this on FB for sure. Thanks for the good post.

Blogger.com is re-formatting blogs and now sometimes the button does not work. I am efforting to fix it. Feel free to copy the post the post's URL and paste it in to Facebook. Thanks.

Jim - You read the state's percentage wrong, or maybe just couldn't believe it. The state will be paying 70 percent of the cost of this project, not 30. That comes out to 500 million dollars. (Can't resist comparing that the the $750,000/yr the GOP and Walker said we didn't have for the extension of the Hiawatha to Madison.)

@E Robinson: I did misread it. And I corrected my text, though I can't believe that. I had figured the feds were reducing it's share, not flipping it.

@ E Robinson - - I hat-tipped you in the text. Nice blog: http://frontporchcoffeetalk.blogspot.com/

Doesn't it make you feel good?

It sure does, but then I am a fan of Blue Oyster Cult and the roundabout signs always remind me of the BOC symbol: