Say, Ron Johnson: Sen. Albert Gore Sr. had a message for you


In Private, Republicans Admit They Acquitted Trump Out of Fear

One journalist remarked to [Brown], “How in the world can these senators walk around here upright when they have no backbone?”

The message is a half-century old, but it should be must-reading for Sen. Johnson 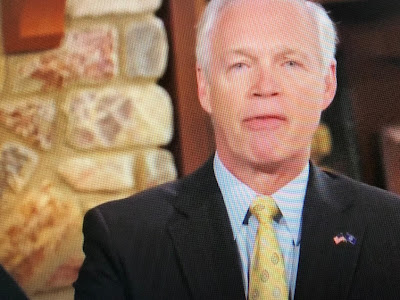 and his equally contemptible GOP partners in self-serving impeachment trial dereliction of duty.

I found the message in a very readable new book which Ohio Democratic US Senator Sherrod Brown has published about American history, progressive legislation and the US Senate.

The book is cleverly organized around biographies of eight Senators who had occupied the Senate chamber desk at which Brown now sits:

Senators inscribe their names in their desks' drawers; Brown picked Desk 88 because some of his heroes - - among them Hugo Black, Robert Kennedy, Wisconsin's Bill Proxmire, and George McGovern - - had previously occupied it.

(Disclosure: Sen. McGovern was my father-in-law)

(Separate side Note: the chapter on Bill Proxmire is stand-alone must reading for students of Wisconsin political history, as Proxmire's career touched, or overlapped with the Madison Capital Times, Joe McCarthy and plenty of other Wisconsin political figures whom Brown includes.)

Brown appends after each chapter personal interactions, where available. which he'd had with his subject, and adds evaluations and criticisms which give his book an even-handed credibility.

And now for the message in Brown's book which at least 51 Republican Senators should read to their shame (I am giving Maine's Susan Collins and Utah's Mitt Romney a pass, for now).

The same day last week when the GOP-run Senate - - including Wisconsin's Ron Johnson - -  gave Trump a pass at the expense of the mission of the Senate, I read these concluding lines about the Senate career of Democratic Sen. Albert Gore in 1970.

The Tennesseean had lost his bid for a fourth term as the south was turning deeply rightwing, reactionary and Republican, but left behind an admonition for today, which Brown has passed on:


After his defeat, Gore wrote: "A senator can ill afford to forget he is a politician, but, above all else, he must always remember that he is a senator. Unless he can meet this test he should never have been elected in the first place."

As I said, Brown acknowledges his subjects' shortcomings, and finds fault with Gore's civil rights and labor records, but moralizing Gore's directive is an historian's gift.

Ron Johnson is a very stupid man, but he is playing his cards correctly here, for himself I might ad, not for the country. Johnson admittedly knew of the extortion Trump was comitting, so here is why I say our Senator is now making a move for himself:

It is a guarantee that ROJO and many others our neck deep in the manure with Trump. Why else would they not let witnesses in??? Everyone knows there was "Quid Pro Quo" and maybe, just maybe, witnesses could say that Trump was looking for corruption in general. On the other hand, witnesses will expose many other of the dirtbags who were involved including our own senator and Russian pawn, Ron Johnson. Bringing in witnesses will not strengthen the impeachment nor will it change voters' opinions on Trump. Those decisions are already solidified in concrete. Common sense would say allow the witnesses, but the senators know that the depth of this corruption will also include several senators who knew all along. These unamerican cowards are a cancer to our country and everything we stand for.

Now to get to the real problem, the voters who worship at the altar of Donald. The man is stupid, a clown, a pervert, ... ; bascically everything that the vast majority of Americans supposedly hate, yet the exposure of his corruptness will get him more votes, because he is the Trumpsters' God. They will vote in droves because he is being picked on, just like Scooter in the recall.

Ron Johnson is the airhead who, when asked what the government could do about homeless veterans, answered, “I don't believe this election is really about details. It really isn’t.”

(Note this generic response, unsuitable for every occasion. Johnson was ordered to memorize that little turd-pearl deflection, and use it whenever Senator Flat-Footed was caught…you know….)

So, in Ron Johnson World, homeless veterans are dehumanized to “details”…

“In an interview with Newsmax on October 16th, 2014, Ron Johnson participated in the GOP’s fear-mongering about the Ebola virus prior to the 2014 elections, claiming that it was a “clear and present danger” that ISIS might purposely infect its own followers with the disease, and come to the United States to deliberately spread it. The director of the FBI and the head of the Department of Homeland Security actually had to go on record to deny this ridiculous claim, which is not just paranoid, it’s medically and strategically ridiculous.”

Serving his actual constituents? Not so much. Did he walk back this lunacy? Not one inch.

Johnson had an unannounced (except to his supporters) listening session in Barbaoo a couple of years ago. Not sure how I found out about it, but I went and asked him what he planned to do about the 2003 GOP bill that prohibits Medicare from negotiating the prices of prescription drugs. His reply: "IF it's true." Then he immediately called on someone else. Ignorant or a liar? How about both?