Karofsky vs. Kelly for WI Sup. Ct. has added importance

There are several reasons why the April 7th runoff election for a seat on the Wisconsin Supreme Court is more than just a battle between Tuesday's first-place finisher Daniel Kelly - - the conservative incumbent backed by Republicans - - and runner-up Dane County District Court Judge Jill Karofsky, favored by Democrats. 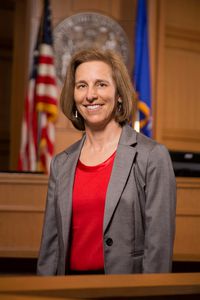 1. Kelly was appointed to fill a vacant seat by then-Governor Walker in 2016, so will carry Walker baggage through election day. Democrats and others who had their fill of Walker, his policies and ideological donors can further dismantle his legacy by turning out a justice who owes his incumbency to the defeated GOP Governor.

2. The Tuesday voting in what is technically a non-partisan contest was split evenly between the conservative, GOP-aligned Kelly and the two more liberal, Democratic-aligned candidates - - Karofsky and Ed Fallone, a Marquette University Law School Professor and the primary's third-place finisher.

That said, Karofsky has a possible advantage, if she can exploit it: the April general election also includes the Democratic presidential primary ballot, which means that extremely competitive contest should balloon Democratic turnout - - and Karofsky's potential total, too.

No wonder the Walkerites tried - - unsuccessfully - - to change the election calendar.

3. All of which means Republicans and conservatives will counter with massive fund-raising and ad buys to back Kelly and demonize Karofsky, just like the heavy, right-wing spending in the 2019 Supreme Court race which helped Justice Brian Hagedorn, another Scott Walker appointee, secure a close win.

Ads by and for Kelly will certainly be tougher than his soft, let-me-define-myself family-friendly TV spots commercials which served to introduce him to voters in what is his first campaign.

4. So the April, Karofsky-Kelly contest becomes a test of both Democratic Party organizing, impact and turnout statewide, as well as GOP/conservative commitments in dollars and energy for Kelly - - and for rescuing Walker's reputation from absorbing another hit.

Bottom line - - a Karofsky win could bode well for Democrats retaking the state from Republicans, and Trump, in November.

That context is not of her making; it's a matter of calendars and history.