Get used to headlines and summaries like this one on the Journal Sentinel's news feed:

Weekend I-94 shutdown will create headaches; here are detour routes

The  regional freeway system reconstruction plan still has decades to go before completion (and the next full-blown expansion, though a federal court ruling may make some profound changes).

Projects within projects will also crop up and bring delays to purportedly-closed out 'improvements'; already the so-called completed $810 million Marquette Interchange four-year uproar has had two major do-over FUBARs - - one because of a failing ramp support, and a second as lanes moving west out of the downtown needed re-striping and shifting that the original reconstruction had botched.

The one-size-fits-all Wisconsin solution - - more of this:

It didn't have to be this way. Fueled by talk radio fear-mongering, anti-big city/light-rail opponents in the Legislature and Waukesha County (the final, proposed starter route did not cross 124th St., the Milwaukee-Waukesha County line) killed a Milwaukee light-rail plan, so we are left today and for the foreseeable future with a one-dimensional, traffic-inducing system that will be patched, torn up, expanded and otherwise in constant 'lane-closed' mode forever.

The proposed initial light rail system would have gained widespread acceptance once available for use - - as it did and does in cities from Baltimore to Charleston to Dallas )see photo, below) to Minneapolis to Phoenix to Denver and beyond - - and suburban opponents near Milwaukee would have become advocates as commuters found rail a pleasant alternative to get to work, a ballgame, Summerfest, or the Zoo, and eventually to the airport, the Amtrak station and thus to events in Chicago and beyond.

So - - orange barrels and cones, yes, but this is banned: 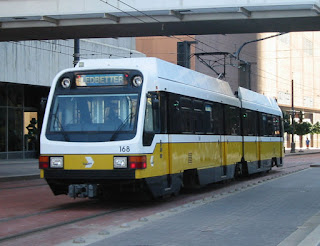 Aound here, conservatives are for choices - - their core philosophy dictates that - - except when it comes to transportation.

Libertarians and far-right ideologues out there have this odd belief that they should never put in a dime for something they do not endorse, or would not use, like a light rail train, and that restrictive thinking and politicking is leading to a political blockade of Milwaukee's proposed downtown starter trolley, too.

But in a democracy with 50 states, we all contribute all the time to systems and programs we may never use.

And to bridges and roads we may never see or access - - from Alaska to Hawaii to south Florida or the north of North Dakota.

Pick a state. Each of us makes a contribution to those states' roads and rail built and operated principally for the benefit of people there, and the entire, inter-dependent connected country - - and for you and me if we go there.

Similarly, people from across the country are contributing to the federal share of I-94 reconstruction, or a new bridge connecting Wisconsin and Minnesota, or the eventual Waukesha By-Pass, and the federal funds making up the Milwaukee trolley account that came from all 50 states' taxpayers, too.

Taxpayers make contributions to pots of money allocated by various governments for all kinds of projects and programs - - local, state and federal - - from school choice vouchers to freight rail moving frac sand to needle exchanges to levees in New Orleans to the Afghan war to the International Space Station - - whether each taxpayer uses or likes the program or spending use, or not.

But in Wisconsin, the not-me exclusionists have cut off rail as an option, thus denying Milwaukee cleaner air, transit-related development, road-construction mitigation, and Amtrak connections within and out-of-state that would have encouraged tourism, university collaboration and commercial connections - - as choices - - between and among people, and institutions from Minneapolis, Madison, Chicago, and elsewhere.

Wisconsin's political congestion - - in the State Capitol, in the business community leadership, in suburban governments - - is consigning the state and its largest metro area to permanent road construction congestion and congested economic development., too

The orange barrel is the new Wisconsin state symbol. As the Journal Sentinel said today, plan for the delays.

"But in a democracy with 50 states, we all contribute all the time to systems and programs we may never use."

So you are using this to justify more spending? Is it any wonder why our country finds itself in so much debt and uncontrollable spending?

"So you are using this to justify more spending?"

Just one line item removed, the double stacking on the interchange, would save the state $1.2 billion. That's more than enough to get back to funding the MKE-Madison line and pay the state's maintenance share for 100 years.

Your side is the one spending like drunken sailors on a high maintenance white elephant, RD.

And your side is the one that's decided that you will no longer welcome self-respecting engineers into your tent.

Conservatives are not rational. You will never reach them. They are subservient to their failed, fearful ideology.

James, You keep blaming people outside of Milwaukee for not building them a rail system. IF A RAIL SYSTEM IS SO IMPORTANT WHY DOESN"T MILWAUKEE BUILD ONE???
Because Milwaukee & liberals want a rail system, but only if it is paid for by someone else.

To Anon 6:08 - - So according to your argument, Waukesha should build its by-pass strictly with local funds. I-94 widening across Waukesha County only with county funds. Same with the I-43 project north-south across Ozaukee County, etc.?

And the endless expansion of Bluemound RD between Moorland and Barker- let the Brookfield residents pay for that disaster.

"Libertarians and far-right ideologues out there have this odd belief that they should never put in a dime for something they do not endorse, or would not use. . . ."

And yet, they're more than happy to force the rest of us to pay for unwanted, unnecessary and unjustifiable wars (or wars of necessity to protect our middle east oil interests), unnecessary road expansions, and private school vouchers!

One of the main reasons Waukesha county so desperately wants to expand to 4 lanes, rather than fixing the two existing lanes is that their bypass project won't qualify for federal funds unless it IS 4 lanes. Interesting thought process coming from the County that is so smug about not taking federal healthcare dollars, light and high-speed rail dollars, and avoids any association with the City of Milwaukee even when it seeks the water that the City is willing to supply. Whadda bunch o' hypocrites.

Hey dummy. If you don't live in Milwaukee you pay ZERO toward a streetcar in state or local tax dollars, and you would have paid ZERO in state and local tax dollars for the Chicago-Milwaukee-Madison-MSP train. If you suburb boys still think otherwise, you have been lied to.

Milwaukee is trying to build a streetcar on its own, it's the Republicans from the 262 that are interfering with this. Those are the facts, and you don't get to make them up. LEAVE MILWAUKEE ALONE

So what's everyone's opinion of the reconstruction of the downtown interchange? How about the South I-94 corridor?
Should have let them deteriorate?
Or, should we have improved them for safety and interstate commerce needs. Things are about to change.
Within the next 10 years there will be a significant reduction in vehicle emissions as we transition to natural gas and propane.
The hypothetical train argument of removing vehicles from the road is dead.
In the last 2 years known natural gas reserves have increase from 60 years, to 250 years.
Imagine a Prius Hybrid with a natural gas engine. A vehicle you could refuel in your own garage.
Imagine Milwaukee County buses with propane engines.

Imagine the US being energy independent in less than 10 years.

"Libertarians and far-right ideologues out there have this odd belief that they should never put in a dime for something they do not endorse, or would not use. . . ."

I don't want a dime of my taxpayer dollars spent on supporting--via not taxing--libertarians, far-right ideologues and Tea Party groups that pay no taxes, yet advocate against candidates and issues that I DO support. No more free tea for you!

BTW: It's not their only odd belief.

Alternative fuel, natural gas and propane, are beyond abundant and cleaner burning than oil.

The US will be energy independent in less than 10 years. In fact we will begin exporting LNG within 2 years.

The US will be energy independent in less than 10 years. In fact we will begin exporting LNG within 2 years.

But why so hostile to alternative energy? It's not as if having MORE choices for energy sources will cause any hardship. Except to the fossil fuel company executives.

Is that who you want to tie yourself to? Well OK then.