The City of Waukesha's Comprehensive Plan predicts substantial residential, commercial and industrial growth and was written before the city rolled out a Lake Michigan diversion plan last month that shows large land increases to the city's water service territory outside its current boundaries.

Land devoted to industrial use is expected to grow 110%, according to Waukesha's calculations - - and again, this is in a comprehensive plan written before the Lake Michigan diversion proposal, with its larger service territory, was proposed.
[Note: this post is heavily annotated with links and archival material]
That service territory map is inserted below - - and adds a land mass of 80% (from 21.7 square miles to 39.1 square miles, or a new 17.4 square miles ) to the current service territory, official records indicate. 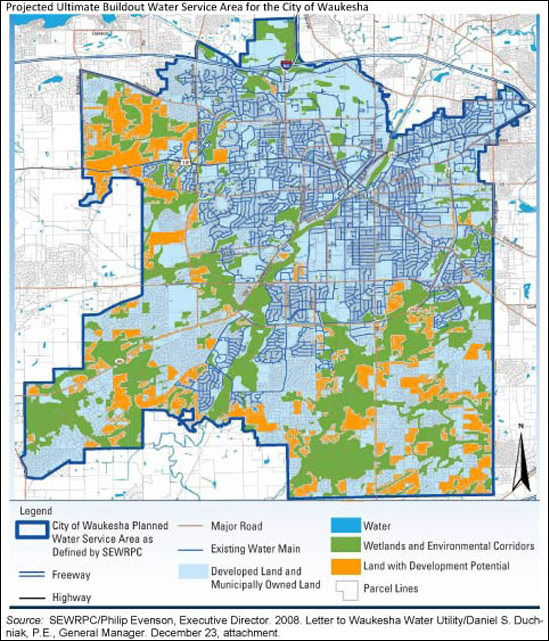 If the expansion includes annexation, the City of Waukesha will gain even more impetus and land for residential, commercial and industrial expansion.
Fresh analysis already shows Waukesha County's job base expanding faster than Milwaukee County's - - and that Milwaukee County's joblessness is rising faster, too - - while Milwaukee's job segregation from Waukesha and elsewhere in the four-county region has been well-documented.
This all suggests that a major component - - intentional or unintended - - of Waukesha's drive for the Lake Michigan diversion is to fuel growth and further lock-in a racially-tinged and separatist regional reality - - and could mean a new wave of job flight from Milwaukee, the very city Waukesha says it wants as the water supplier.
Here is a relevant section from Waukesha's Comprehensive Plan, and some development numbers: - - note the large increase projected in industrial land use:
* Land in 2000 devoted to residential development: 4,595 acres - - projected to grow 76% by 2035, to 7,979 acres.
* Land in 2000 devoted to industrial development: 921 acres - - projected to grow by 110% by 2035, to 1,943 acres.
* Land in 2000 devoted to commercial development: 770 acres - - projected to grow by 24% by 2035, to 958 acres.
[Editing note: To clarify - - This data is contained in the City of Waukesha's approved Comprehensive Plan, which is an element of its Smart Growth Plan, according to Waukesha's Community Development Department]
Yet there are noises being made in Waukesha political circles that the city should not make any payment agreement (above state-approved per-gallon water rate charges) with Milwaukee directly share the development gains that might accompany diverted water, or that would contribute to regional cost-sharing to address regionally-shared problems.
Remember that New Berlin got a relatively-small water deal completed with Milwaukee in 2008.
It is a 20-year-agreement, and provides Lake Michigan water to a portion of New Berlin that includes its big industrial park in New Berlin.
The record shows that the park when opened had seen an initial infusion of 42 emigrating Milwaukee businesses (see the 2003 Legislative Reference Bureau report in that file) when it opened (more history and analysis here) - - and the reality of the industrial flight from land-locked Milwaukee helped lead New Berlin to agree as part of its water deal to make a payment of $75,000 annually for the life of the agreement.
It was more or less an acknowledgment that there is a relationship between diverting water and diverting growth, so New Berlin, in effect agreed - - modestly - - to assist Milwaukee - - and thus the region - - with socio-economic costs the big city shoulders disproportionately within the region.
Yet some Waukesha politicos suggest that their city's contribution should be zero - - for what would be a significantly larger diversion.
Doncha' just love regional cooperation?
So if Waukesha is on a continuing path to growth and jobs, does fueling it with Lake Michigan water make sense for Milwaukee?
Especially without any benefits'-sharing?
And would a diversion that intentionally added jobs to one city in the region be in the spirit of the Great Lakes Compact?
One Great Lakes expert says "no."
Final matter: some of our regional socio-economic issues are getting an airing now because the Southeastern Wisconsin Regional Planning Commission (SEWRPC) has hired consultants at UW-M to examine them. Several focus groups were held last week and public input is still being sought through a website.
That's all to the good.
But SEWRPC waited until after it already spent years writing, then issuing lengthy draft recommendations about regional water supply solutions late last year before hiring its socio-economic consultants.
Of course, a key recommendation is diverting Lake Michigan water to Waukesha. That unsurprising conclusion was a fait accompli and surprised no one.
SEWRPC should have coordinated its regional water supply study and plan drafting with ongoing, high-profile and top priority socio-economic discussion - - with the value of water front and center, not as an after-thought.
The parameters of the regional water study were kept relatively narrow, then at the last-minute, under pressure from activists and its own Environmental Justice Task Force, SEWRPC agreed to add the socio-economic component, and somehow graft it onto or blend it into the rest of the study.
How that will play out will be known sometime after March.
But SEWRPC has given the UWM consultants just 90 days to do their work, while the consultants and SEWRPC staff that that worked on the water supply study got started in 2005.
Regrettably, this tunnel vision is SEWRPC regular practice and relevancy downfall. It reflects the total absence of City of Milwaukee representation on its 21-member board, and is why I have argued that the agency should be fundamentally restructured with Milwaukee going out on its own.