We have freshly relevant reasons to dismiss WI GOP disease enabler and Assembly Speaker Robin Vos's ridiculous April election-day pronouncement that it was "incredibly safe' to go outside with a deadly pandemic spreading suffering statewide.

It was b.s. then and the stench is stronger now.

When The Trump Robot from Burlington 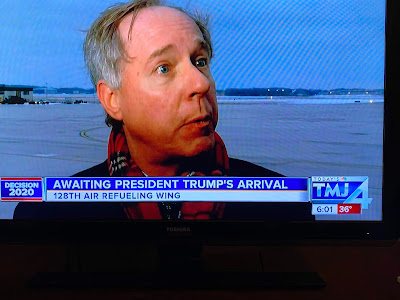 made his reckless remark on April 7th, Wisconsin's COVID-19 death toll had risen by a stunning 15 - from the previous day's 77-to 92, Wisconsin's official data showed. (See continuously updated graph and chart).

That was a sad and serious number in the early days of the virus which was far less-well understood than it is today.

So you'd have thought life-saving caution would have guided the GOP-led Legislature and their allies in COVID-times since then, and certainly now with months of matured understanding available to public officials across the board, but Vos and his allies continue to evade accountability have done the precise pandemic-pandering opposite.

Which is why Wisconsin reported today 17 new COVID-19 deaths as the state's overall exploding COVID fatality toll has hit 1,300.

The same official data show that COVID-19 cases grew daily by 175 in the week prior to Vos's dopey denial, but fresh data in the same chart shows daily average has now zoomed by a factor of nearly 13 to 2,255.

Which is why Wisconsin officials, having now grappled with just under 120,000 COVID-19 cases and a death toll equal to a small town population are now using words like "crisis" and "devastating" and "going to get much worse before it gets better," and not Vos's signature "incredibly safe" dishonest stupidity.

Because it's not incredibly safe out there: it's incredibly dangerous, and worsening. as all the progress made during periods of quarantine and sacrifice have been thrown away by GOP partisan propagandizing, reckless personal bad behavior and a bizarre disregard by too many people and rightwing politicians unwilling to keep fellow state residents healthy, safe and alive.

Because the Rightwing/Vos COVID EnablingTeam is still litigating and undermining mask-wearing to score political points against Governor Evers whose authority Republicans and right-wingers keep undermining while tens of thousands of jobs, a generation's schooling and 1,300 lives (and counting) have been lost.