Shoutout to John Norquist for downtown that fears no deer

Milwaukee - and networks broadcasting Milwaukee Bucks' playoff basketball - are all in love with the Deer District, and rightly so. It's a cool upgrade to the city and downtown. 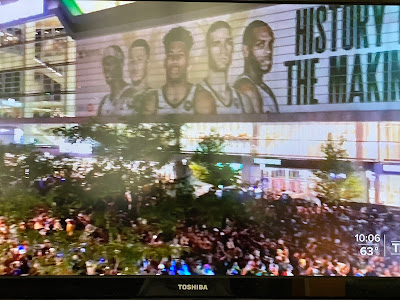 But do not forget that without the persistence of former Mayor John Norquist who won the fight to tear down the ugly and intrusive overhead interstate highway spur that blocked the north side of downtown from the rest of the city, there would be no Deer District adjoining the new arena.

And no extended Riverwalk, no energized Water St., and so on.

And there are plenty of other people to thank- notably former Bucks owner Herb Kohl - and others to boo, including Scott Walker and other suburban-tilting Republicans who killed light rail access to the area, Amtrak connections from the West and commuter rail from the South. Keep that in mind if the vehicle congestion in the area and parking hassles tick you off.

But give Norquist his due:

In the 1970s, John Norquist was a lathe operator and a community organizer who worked to stop a plan to surround Milwaukee with freeways.

Three decades later, Norquist was mayor of Milwaukee and a member of the board of the Congress for the New Urbanism.  He was the force behind a plan to remove Milwaukee's Park East Freeway, to restore the traditional street grid that the freeway had disrupted, and to redevelop the land using a New Urbanist zoning code that would create a district of housing, offices, and entertainment.

And my posting just hits the highlights; it's a long and complex story.

The 1-mile Park East Freeway was the spur of an halted freeway that was to connect Interstate-43 to downtown Milwaukee. The area around the Park East Freeway remained underutilized building vacancies, surface parking lots, and industrial buildings after the project stalled in the 1970s.

Eventually, city planning staff and leadership began to see the freeway stub as a barrier to redevelopment efforts. With city support, a freeway removal campaign coalesced around the removal of Park East Freeway and conversion to an at-grade boulevard.

In 2003, the freeway was removed and replaced with McKinley Avenue. The urban street grid was restored. The City of Milwaukee created a redevelopment plans for the area. Under the direction of City Planner Peter Park, the city drafted a form-based code for the renewal area to encourage development that reinforced the original form and character of the area. The land adjacent to the freeway was ultimately redeveloped as a combination of commercial, retail, townhouse, and apartment uses.

The decision to rehabilitate the Park East Freeway area hinged on several key factors: the abandoned freeway separated the North side of the city from its downtown, it interrupted the street grid, and it created a barren area in the city.

$25 Million for removal and boulevard

• Freeway demolition, as an alternative to attempted reconstruction, saved $25 to $55 million in funding

Bravo to all concerned!

Someone should write a book. This is an interesting story. Thanks!